Great campsite, but it's a rainy, cold day and given there's no attractions or diversions in the area around the park worth venturing out to see, we're "stuck" inside. Decent data available but after awhile one just gets tired of scanning all the streaming services for something new to watch.

Not big on card games, or board games but thinking about it I do seem to recall that they make these gaming consoles where two players can participate interactively by plugging into your television! As I recall there's this ball like thing and you bat it across the screen to your opponent and they bat it back. That goes on until one or the other fails to successfully return it. I think they called the game something like "Pong"?

Asking around about this game I must say I got some pretty strange looks as apparently they have come a LONG way since this Pong thing. Even have color screens now!

Looking around I now do see that there's tons of games and a variety of consoles available. But it does seem that almost all these games are quite violent! Blood & guts, shoot 'em up, kill or be killed kind of games. Sheesh, that just seems a bit too stressful and gory for my taste.

Wondering if anyone might know of a system that offers games that might be at least a bit more cerebral and less violence based? I did do some searching but haven't really been able to find much. And, It would not be fit for a public form to describe what I found when I searched for "adult games". Apparently the word "adult" these days is a code word for some pretty naughty stuff.

I have not played in quite awhile but I used to play a game that I enjoyed on the Ninetendo system.

It was very realistic and is called Zelda, Breath of the wild. I enjoyed just exploring all the different travels around this artificial world.

You do not especially have to get into all the fights and can just relax and wander around.

Many years ago I use to play Zelda on a Gameboy.
I would hit the flea markets and look for a older Ninetendo with games. As I recall most of the ninetendo games were rated G.

Get an iPad. There are thousands of non FPS (first person shooter) games. Real Surf is my current favorite.

Find a NES mini or SNES mini online or in a store. The NES mini is a modern version of the original Nintendo entertainment system, modernized to use an hdmi plug and play set up, and it has like 25 of their games loaded on it including everyone's favorite super Mario Brothers. The SNES mini is basically the same thing but it's based on the Super Nintendo system that came out in the mid 90's and has 25 or so games from that generation of console. Both are very fun and come ready to play with everything you need right out of the box, and you don't need to figure out a 40 button controller because these ones are pretty basic. We had the whole family playing the SNES mini on Christmas a few years ago and it was a really good time.

This is a one player thing but has old arcade games. The one we have has galaxian, pacman and a few others... 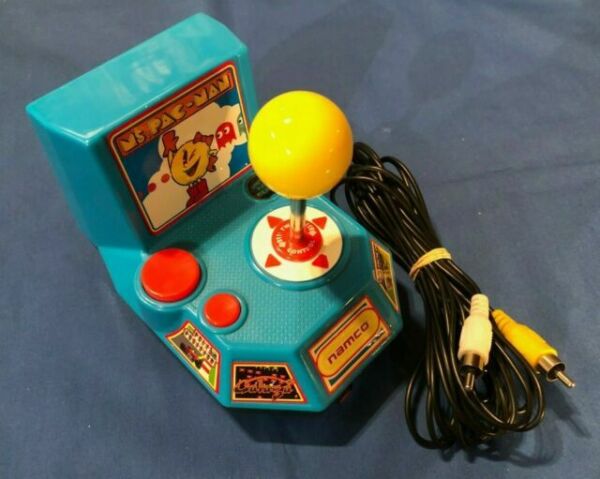 Find many great new & used options and get the best deals for Jakks Pacific Plug and Play TV Games Namco Ms. Pac-man 5 in 1 Arcade Classics at the best online prices at eBay! Free shipping for many products!
www.ebay.com

This thread has inspired me to look at games for when we RV. I grew up with the original Castle Wolfenstein (character based) in ~1980. I didn't get back into games even when my kids played them. I am going to do some shopping!

thelazyl said:
This thread has inspired me to look at games for when we RV.
Click to expand...

Some interesting recommendations for sure. Thanks to all for the suggestions a number of which I had never heard of.

Going back a lot of years the son of my ex was really into games like Mario Brothers and Zelda. A few times when he left the game unattended (a rarity) we played with it a bit. That was pretty much state-of-the-art back then. And has been mentioned by others responding, many of the old games are still out there and can be fun to play.

Flash forward to today and you have the big buys like Microsoft, Sony, and Nintendo each touting their features as superior as well as numerous other manufacturers marketing to fill the niches.

With systems like the Oculus Quest 2 making an appearance with their VR system one is left to wonder what the future holds. I'm thinking an AI driven box controlling a holographic environment perhaps with taps into your brain to stimulate one's senses?

Oh well, in the meantime, I'll have to look around and see if Mario or Zelda are still out there...
You must log in or register to reply here.