The friendliest place on the web for anyone with an RV or an interest in RVing!
If you have answers, please help by responding to the unanswered posts.
See posts with no answers
A

Hello! I recently purchased my first RV, it's a 1999 Ford Econoline Class C. Everything was working when I purchased and I had a mechanic tune everything up as well. I just checked my appliances so I can leave on a roadtrip and I'm having major issues.

NONE of the outlets are working, I tried resetting the GFCI outlet and it didn't change anything. Water pump and lights work fine. Generator also works fine, there's a new battery as well.

My oven and microwave will not turn on. No gas in the oven/stove and nothing from the microwave. There's no reset emergency on/off on the propane tank but it says its ¾ full. The only things on the propane tank are the vapor valve and the fill valve. The LP gas detector beeps a few times when turned on - not sure if that's normal.

Are you plugged into shore power?
A

No, I had the generator running - do you think these appliances will only work with shore power?

Try plugging it in to shore power to see if they work there. If nothing else, this will help to identify where the problem is.
C

If the micro and wall outlets are not working when your generator is running, you may need to plug your shore cord to an outlet that is powered by the generator. This is usually in the same compartment as your shore cord.
The micro and wall outlets are 120 volts alternating current (ac) your lights and Water pump most other electric items use 12 volt direct current (dc) which comes from the battery. Concerning the propane fueled items. Do your stove burners light? Does your water work on propane? How about the refrigerator? These items may have pilot lights that need to be lit before they will work.
Welcome to the RV life and welcome to the forum.
A

Thank you so much for the reply! It was not plugged into the generator outlet. Microwave, outlets are now working. I will try to light the pilot for the fridge and stove. Any tips for that are appreciated Super thankful for the RV community right now!

Yeah it is a common mistake for a noobie so don't feel bad. Welcome to the forum and to RVing,

I've seen about a half dozen of the "it does not work on the generator" in the past two weeks on various forums. Almost always the shore is not plugged into the generator.

The older LP gas detectors did beep two or three times when power was first applied. Mine was the CCi or something like that, they went out of business, I replaced it with a Safe-T-Alert by MTI. If you have an old LP gas detector you might want to see how old, as they are only good for 5 to 7 years.

There should be a manual shutoff valve on the gas tank on the frame. Some RV's use an electric one wired thru the LP gas leak detector so it shuts off the gas if a leak is detected.

As for gas appliances. IF you have propane in the tank, and IF the valve is turned on, or has been off for a while you need to purge the gas lines. To do that is really simple. Using a gas match turn on a stove top burner and use the gas match to try and light the burner. You should see the match flame move around as air tries to blow it out. Eventually it will light. If is does not light after a minute or two, you might have a regulator problem.

If the match is flickering because of air movement then at least you know that the regulator is working. Propane is pushing the air out. Keep trying to lite the burner.
A

This might be a dumb question, but trying to make sure my camper doesn't blow up! On my propane tank, I have the fill valve and a valve labeled Vapor that is connected to the regulator. It was in the closed position and there was no air or gas coming from the stove. Should this valve be open/is this the regulator valve?

annafrick said:
This might be a dumb question, but trying to make sure my camper doesn't blow up! On my propane tank, I have the fill valve and a valve labeled Vapor that is connected to the regulator. It was in the closed position and there was no air or gas coming from the stove. Should this valve be open/is this the regulator valve?
Click to expand...

Can you send us a picture?
A 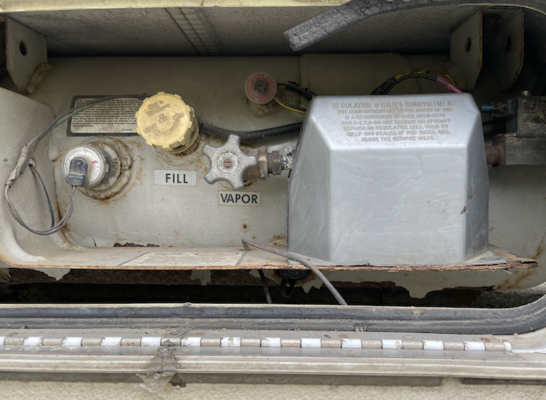 I tried to light the burners on the stove for several minutes, it seems like there's no air or propane coming from the burner. I can hear the fridge pilot trying to light but it is not fully lighting.

I opened the vapor valve and tried lighting everything with the generator off and on and neither worked.

On the Winnebago View forum regulator failure was a chronic problem. WBO had used Fairview regulators on Views after 2012 and they failed frequently. It was always recommended to replace them with a Marshall-Excelsior regulator as they had been used in older models and never caused any problems.

The regulators recommended (and the View has a tank and regulator cover, nearly identical to the one in the photo above) is a Marshall-Excelsior MEGR-298. MEGR-298H, or MEGR-298P (the P stands for clear plastic blister pack, the non-suffix number is a bulk pack in a plastic bag, and the H suffix denotes a high flow, that is not really needed, even with a generator, but certainly will not hurt anything to have. This is a horizontal mount version of regulators similar to the vertical ones used on travel trailers.

I just did a search and the very long standing member who has always suggested fixes for propane problems said the following..... " I hate to belabor a point, but if I had a mid 2013 or newer (Winnebago View), I would remove and replace the Fairview propane regulator with a Marshall-Excelsior MEGR-298 regulator. No, I don't work for Marshall or have any of their stock, it's just that all of these problems on newer units with propane issues and propane appliances can't be coincidence. I never see these type of issues on the 2012 and older units with the Marshall-Excelsior regulators. Just my opinion.
Len"

Basically he is recommending being proactive and replacing Fairview regulators, even if still functioning, as they WILL fail, sooner than later. Similar to the cheap charge/boost relays used by many RV manufacturers rather than expensive ones like Cole-Hersee products.

Other manufacturers may have used various regulators at different times. Fairview regulators are now made in Mexico, Marshall-Excelsior makes all of their products in the USA.

annafrick said:
This might be a dumb question, but trying to make sure my camper doesn't blow up! On my propane tank, I have the fill valve and a valve labeled Vapor that is connected to the regulator. It was in the closed position and there was no air or gas coming from the stove. Should this valve be open/is this the regulator valve?
Click to expand...

That valve allows high pressure GAS (not liquid, the tank is actually up to 80% full of liquid) to leave the tank and go to the regulator and the system on the motor home. Opening it is doing exactly the same thing as when you open the valve on the top of your 20 lb BBQ grill propane bottle.

The layout of the tank depicted below is slightly different than yours but it has the same components. 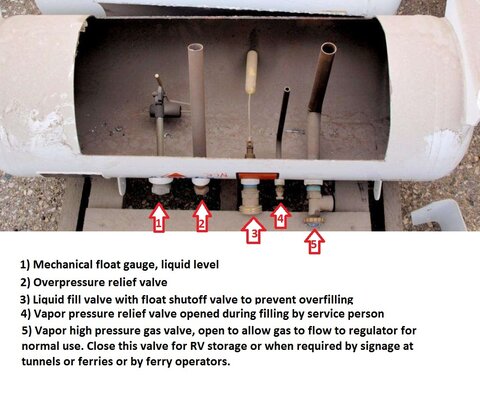 Looking at the photo or your tank and regulator. It appears there may be a solenoid valve to the right.. This means it needs 12 volts to open the valve. it gets that 12 volts from the explosive gas (propane) detector near the floor inside the RV. Detector must be on and powered.. If you have dead batteries it won't work as it's a 12 volt house device.

Gary RV_Wizard said:
The Vapor valve needs to be open to let LP gas vapor flow to the regulator and appliances.
Click to expand...

The picture that Charles posted is a good explanation. In your picture, notice that vapor valve then supplies the pressure regulator which is what is under the gray plastic cover just to the right of the valve.

John From Detroit said:
Looking at the photo or your tank and regulator. It appears there may be a solenoid valve to the right.. This means it needs 12 volts to open the valve. it gets that 12 volts from the explosive gas (propane) detector near the floor inside the RV. Detector must be on and powered.. If you have dead batteries it won't work as it's a 12 volt house device.
Click to expand...

It's DC powered from the LP gas detector, but probably not 12v.

If the original LP gas detector was replaced or is non-functioning, it may be necessary to remove the detector solenoid from the gas line. The RV gas safety code was changed many years ago to elimintae the gas shutoff solenoid and replacement detectors with solenoids are hard to find and really expensive.
You must log in or register to reply here.