Hello all!
My Class C 24 foot motorhone on the Ford 350 chassis is dying to haul a motorcycle. Problem is, I don?t know the best way to do it.  It has a 4inch square bumper and a beefy trailer hitch that can haul 5000lbs.
I?m leaning towards the type that you lift on to the back of the RV not a trailer (though I?d like to hear your opinions). I?d rather not pull a trailer cause I like the compactness of the class c.

I have seen a lot of these "swivel wheel" devices. Do a GOOGLE for it.

Ranger smith said:
I have seen a lot of these "swivel wheel" devices. Do a GOOGLE for it.

I wonder how much of, say, a 1000 lb bike would count against the class III hitch tongue weight limit with the dual wheel model.  I guess the manufacturer could explain that if an interested person called them.

You might do something like this, you would be at your limit, maybe put a Eye Bolt up high on rear of Class C, and run a support cable to help with the weight / bouncy potential.
https://www.discountramps.com/dirt-bike-hitch-carrier/p/MX-600X/?CAWELAID=820562990000010411&gclid=CjwKCAjwspHaBRBFEiwA0eM3kR4_va1Ywa37__AFeadpf8R5YsnH-9Y8NXMbFZ1zeXG_o5AP-5UmGhoCefYQAvD_BwE&ppcsclkid=GD5rVyWzcQR1&ppcstrkid=1069721600&ppcsu=xhg7f5djqlusist

I would say it probably would interfere with tail lights, but you could always add additional ones a little higher, like this
https://www.superbrightleds.com/moreinfo/truck-lights-lamps/rectangle-8-led-truck-and-trailer-lights-kit-8-braketurntaillicense-lights-kit-w-20-high-flux-leds-pigtail-connector/613/1857/?utm_source=googlebase&utm_medium=base&utm_content=TLS-LP&utm_campaign=GoogleBaseChild&gclid=CjwKCAjwspHaBRBFEiwA0eM3kTFeeDKXAnF-e99hVosieD_3G15nDfxf-_0FVmnn0gWGSh4MFSUzghoCdjcQAvD_BwE

Maybe even make a light bar, that plugs into your trailer wiring?

I concur. It is imperative you tote that sweet Scout everywhere you explore!

For the hitch mount motorcycle racks, My concern was the additional sprung weight, placed high and far back of the axle. These class C's are sketchy enough to drive already.

The swivel wheel units are nice, but are pretty much single purpose, and it is after all a trailer. Harder to resell if you are displeased with it. Bike exposed to the elements and thieves unless you get the tent cover. How long do you think a fabric cover will last?

For the same price as the swivel wheel setup, I opted for a 6 x 8 enclosed cargo trailer. It fits my old motorcycle as well as additional cargo. Need extra storage in your 24' class C, probably. I just unhitch the trailer to fit into smaller campsites.

The only problem with towing an enclosed cargo trailer is it precludes towing a toad ... unless you get a trailer large enough for both.
N

To answer question #3, the limit of your hitch tongue weight is 500lbs so you would not be able to put a 550(+)lbs MC on a hitch rack. I had the same problem with my MC & opt?ed for a 5x8? utility trailer which works GREAT! I would add a pic, but not sure how to do it.... Sorry.
S

This is something I have looked at as I would love to haul my GTR1400 (670 lbs + fuel) and I have yet to fnd something I'm comfortable with other then a small flatbed.

There are some high end lifting motorcycle platforms that go on the back of a motorhome. They have a means of lifting the bike and platform off the ground. Most use addition supports to the frame to support them. I have only seen them on a class A DP and I saw one in person on the side of the freeway after it fail and bent down to the point it dragged on the ground. That really made me think twice about doing that. They also start in the thousands of dollar range. That is steep for a couple of trips a year.

I would not tie into the body of the RV to help support anything hanging off the back. Most RV's are barely able to support the roof let alone anything else.

Here's one I was looking at.

i have been looking at something like this to tow my Honda Goldwing. This looks good. https://ca.stingertrailer.com  It is also made in Canada so you could save a lot money on the exchange rate. It is light, can be folded up for storage, capable of towing even big bikes.

The fold up trailer is pretty nice, I looked at them seriously, but used an enclosed trailer.  The other option I had found was a tow dolly with a front section the bike would load sideways on.  I have since seen these in use.

The ones that hang off the back, I had one and sold it before ever mounting it on my A.  The C's and A's (gas), have too much overhang and not enough actual chassis that far back to attach to.  Think back to physics and a fulcrum.  The carrier itself is up over 200 pounds, then add the bike.  Mine was about 700 lbs,  so on my coach, 900 pounds 13' in back of the pivot.

Carrying by lifting front wheel.  Friends of ours tried it, and the bike was too heavy, ended up bending to the point the wheel and frame to carry it was dragging on the ground, ruined the tire and the mount.  He had to leave it on the side of the road and go back for it.
Z

Old thread, but I'd like an update if anyone has one, or a NEW opinion.

How about a swivel wheel dolly such as Swivelwheel-46 (Single Wheel) there are 2 or 3 companies out there that make versions of this, some allow you to also pull a car behind the dolly. Such as Toy Hauler Manufacturer | Freedom Hauler | United StatesTrailer Manufacturer or micro trailers like SmartTrailers

I've seen this type of rack in use mounted in a F150 truck. Though I imagine the truck / motorcycle combo would exceed the towing capacity of your Class C 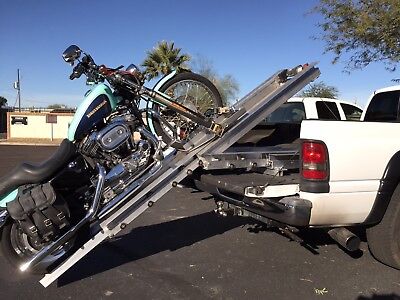 Motorcycle Lifts and Ramps with Tailgate Always On The Truck, See Description | eBay

This NEW loading system is built to load and unload your bike on your truck with the tailgate “on” and in the “down horizontal position” while loading and unloading. This loading system removes from truck in 2 to 3 minutes.
www.ebay.com
You must log in or register to reply here.