1999 Coachman Catalina Class C, House battery stopped charging. Won't charge from shore power, generator or chassis engine. I'm right now using a auto battery charger sitting in the step well, for when I'm plugged in or generator is running. One of my other motorhomes had a relay go bad that caused something similar, I don't know where to look on this coach and can't find any drawings on-line

I would suspect that your 120V to 12V converter has failed. That is what is common to both means of supplying 12V power but not when running the chassis engine.
Last edited: Aug 14, 2022
M

Need to step back a second, the converter doesn't control charging from the alternator. So it's implied there's something else up, either a fuse, circuit breaker or relay. Do the house batteries supply power OK?

Wizard46 said:
1999 Coachman Catalina Class C, House battery stopped charging. Won't charge from shore power, generator or chassis engine. I'm right now using a auto battery charger sitting in the step well, for when I'm plugged in or generator is running. One of my other motorhomes had a relay go bad that caused something similar, I don't know where to look on this coach and can't find any drawings on-line
Click to expand...

How old is the house battery?

"I'm right now using a auto battery charger sitting in the step well, for when I'm plugged in or generator is running."

How long will it hold a charge after that, and what charge current are you using?

Does the battery provide 12V to the coach when charged?

There is the inline fuse that disconnects the battery, have you checked it?

this one, per your rv owner's manual 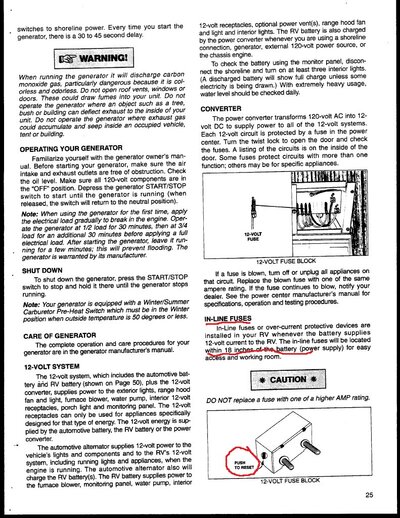 Sorry it took me a while to get back. I'm on the road. The Charger I'm using is a 16Amp. It charges it full in a few hours when I'm plugged in.

New battery about two months back.

Yes the battery does provide good voltage to the house systems and even cranks the generator when it has a charge, the coach will drain the battery down if I leave too many lights and such on.

Seems to me those fuses, even in line ones protects from overloads,

Normally, on a class C, there is a solenoid isolator under the hood to only connect when the engine is running. Look around under the hood for big cables and follow them to the solenoid. Without schematics it's a matter of following cables.

Think I've probably found the problem. While on shore power, disconnected the positive battery cable from the battery. Lights in motorhome dimmed ?????.

Traced positive cable to what I think is a solenoid and measured voltage, Cable side 8.9V. Big red cable going to terminal on the other side of the solenoid 13V.

That tells me the solenoid contacts must be corroded really bad and not making a good connection. I guess I'll have to wait until I get home to pull it out to get the information off it to order a new one. The solenoid is mounted right next to 3 mini in-line circuit breakers and will have to be accessed from under the coach.

I am most definitely not an expert, but I did have a “house battery not charging issue” AND it-turned out to be a small resettable circuit breaker on the positive line going from my house battery to my converter - the gizmo was about eight inches from my positive house battery connection and was wrapped in electrical tape - I thought it was some kind of splice to make the cable longer. good luck with solving your problem.
W

Sounds to me like your converter is dying/dead.
The solenoid you traced to sounds like it's the alternator charging circuit. So on one side you are reading the weak converter, on the other side you are reading your strong start battery.
Without shore power, start the engine and you will likely see the same on both sides, 14v or so from your alternator.

Is the relay is the typical round silver one with two big terminals and one small terminal, they are pure crap. Winnebago used them and they don't hold up. A Cole Hersee 24213 is a excellent replacement as it is rated for 200 amp continuous vs the 80 amp or so most of the others are rated for. It has silver tungsten plated contacts and probably will last longer than the motor home. It has two small terminals. You would hook your existing small wire to one of these and make a short jumper to go from the other one to a good ground, probably one of the mounting bolts for the solenoid.

The only issue with this relay is that the big terminals are rather short and so you have to be careful with it. NEVER allow the terminals themselves to turn as it will move the contacts inside out of orientation. Also NEVER loosen the big nuts on the inner end of the big terminals. You will probably have to discard the flat washer to make things fit. Wished C-H made a long terminal version of this, but they don't that I know of. 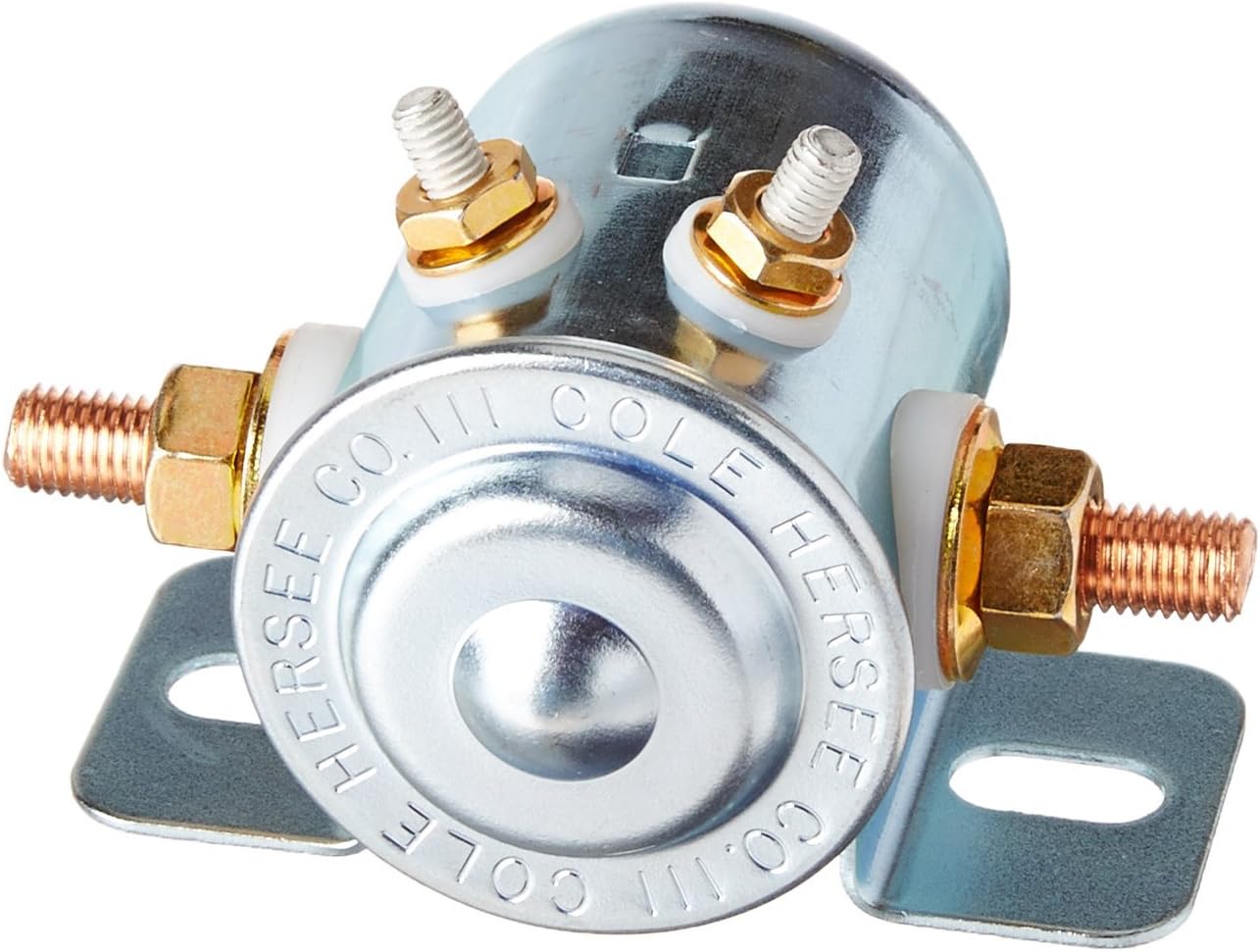 Plug up shore power and test for voltage from the converter, bet it is bad too. What kind of power center and converter do you have? This is a good time to get a good multistage converter such as one of the Progressive Dynamics (not to be confused with Progressive Industries) units.

Well I changed the Solenoid that I referred to and now the chassis alternator charges the battery, tracing I found that when the engine cranks it activates the solenoid and charges the battery. Converter still not charging so I've still got a problem there, will ha e to wait until I get home to correct that,

Wizard46 said:
Well I changed the Solenoid that I referred to and now the chassis alternator charges the battery,
Click to expand...

Good job! It is usually best to take on one problem at a time so 1 down and 1 more to go!
You must log in or register to reply here.