How early is too early to go out west

I am going to go out to Colorado and Wyoming this spring and was aiming for mid May, but is that to early expect all the snow to be gone? I have a 2022 winnebago adventurer 29B. If it is too early then when would be the earliest. I have to be back in time for another trip in Ocean City Md on June 10th

Location
On the move

It really depends where you plan to go. This was May 20 in Granby Colorado at about 8250 feet. 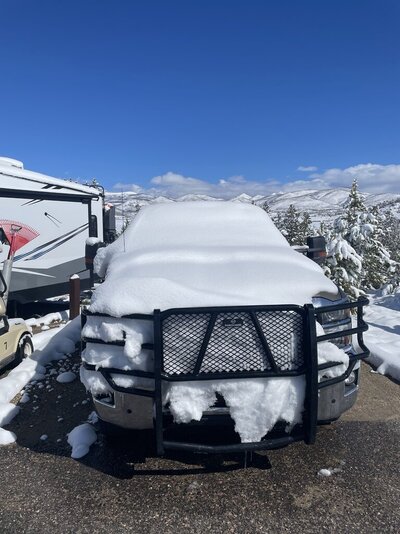 Even if the snow is gone in May, that doesn't mean you can't get a Spring storm that blows in with some brief snow. You should be prepared for anything.

I'd say mid-May is a good choice, but as others said, you still need to be prepared for late winter storms. And is you travel to high elevations, expect snow and freezing temperatures regardless.
L

This might sound silly, try looking at the "average last frost date" for gardening in the areas you want to be in. It's not foolproof though. I lived for many years in a mountain area with a last frost date of April 15th and have gotten a late snow or ice storm past that date. I would also add to keep an eye on the weather several days in advance.

If you go by the frost dates, I suggest you use this website. You will need to know the zip code for the area you are interested in. It also give the first frost date as well as the last. Very handy. Frost Dates: First and last frost dates by zipcode

rider1520 said:
I am going to go out to Colorado and Wyoming this spring and was aiming for mid May, but is that to early expect all the snow to be gone? I have a 2022 winnebago adventurer 29B. If it is too early then when would be the earliest. I have to be back in time for another trip in Ocean City Md on June 10th
Click to expand...

The attached pic was taken June 10, 2019 from the SV floor, with the Tetons in the distance.

rider1520 said:
I am going to go out to Colorado and Wyoming this spring and was aiming for mid May, but is that to early expect all the snow to be gone? I have a 2022 winnebago adventurer 29B. If it is too early then when would be the earliest. I have to be back in time for another trip in Ocean City Md on June 10th
Click to expand...

I would say it totally depends on luck.

For an example, here in Reno, the same day in May or September one year will be 105°F and clear. The next year with snow on the that same day. 5k' elevation right here at my house (on top of a hill).

I have seen snow here in late June as well as in early September.

High elevations are often not predictable for more than a few days. Check before you go.

There are no guarantees on spring or fall weather in the higher elevations.

I have also seen (many times) inaccurate weather reports for just one day in advance, where snow was expected, but never came or vice versa.

Also, when I was in the army at Ft. Carson, Colorado in 1971 (after Vietnam) I can recall spring days where it was so windy, it was very difficult to walk outside, and cars were getting blown off highways. There are other weather conditions besides snow that can cause problems for RVers.

So good luck. You will have to count on it, unfortunately.

Don't forget, May is traditionally tornado season in the midwest. I found that out the hard way traveling a few years back. Looked it up and that's when I found out.

rider1520 said:
Sounds like I may rearrange things and go in late July or early August
Click to expand...

Much safer time to go for many reasons.

The only two months I have never seen snow here in Reno are July and August and I am sure that holds true for most places across the USA that are 5K' or above in elevation.

BTW, last May, I was at the French Camp (RV camp) near Tom's Place, CA (above 7K' elevation). I originally planned on staying there for a week, but poor @Old_Crow (was Camp Manager there) had to put up with me for an extra week because of a weather change. The change was WIND. Was way too windy to drive an RV back here safely so I stayed there for another week.

Thanks to everyone for your responses!

It will be busier then I expect

jackiemac said:
It will be busier then I expect
Click to expand...

The downside of August travel. Lot of big events making August travel higher, stuff such as Hot August Nights and Burning Man here in Reno, Sturgis Motorcycle Rally in South Dakota, and much, much more.

But I guess there are reasons why they pick August for such events.

A couple of years ago, here in Reno, there was Street Vibrations (motorcycle thingy), just like every year here in September. They all got snowed on that time.

While I have seen snow in September here a few times, not once in July or August in the >20 years I have been here. I expect the same for many places.

rider1520 said:
Sounds like I may rearrange things and go in late July or early August
Click to expand...

July and August will be the busiest months at Grand Teton and Yellowstone. The Youtubers Long Long Honeymoon always go to GT and Yellowstone and they wait till about Labor Day to do it, the fall season is slower and cooler.

I say just go, and be prepared to spend a night or two waiting for the pass to open somewhere if you get hit by a late season snow storm. I was in New Mexico in late March about 15 or so years ago, and got hit by a blast of winter weather driving north out of Carlsbad, ended up only making it to Roswell (75 miles away), driving as snow was falling for the last 30 or so miles. It was so bad that I-40 across northern NM was closed for 2 days. On another occasion 30+ years ago I found myself drying in falling snow crossing a pass in Washington state on the last day of July, so it really can snow anytime, particularly at elevation out west.

I'm inclined to agree with Isaac, that mid-May isn't a bad time to go. Just be aware that weather can change in a hurry, but most years it'll be mostly in the mountains themselves, mostly at higher altitudes, that you'd encounter snow and bad road conditions, and usually waiting a day, maybe two, will let you through just fine.

And late spring can be a beautiful time. For instance I was in Lathrop State Park near Walsenburg, CO some years back, in early June, and the cactus were blooming all over the place, giving me a lot of beautiful video shots.
U

I live in the high country of Utah and I agree with Isaac-1,, there are usually no real surprises if you stay on top of it,, you can always alter your route if needed and enjoy some of the most scenic areas without the crush of people.. Let THEM be the scaredy cats and miss the best times..>>>Dan

I agree with Isaac! Just go and keep a flexible schedule.
This website is great for the Western states: One stop shop for travelers, it takes a short learning curve to navigate the website, but it's well worth the effort. It's a mapping program with a host of other features.

IMO, any long RV trip should be on a flexible schedule. Like my trip last year. It was important for me to NOT know when I would be home before leaving on the trip. In fact, I had no clue until I was close to three months into the trip.

Ditto on the flexible schedule, if other factors allow it. The maiden voyage in our current coach was 10,000 miles over 4 months. We'd get up in the morning and toss a coin to decide if we moved on or stayed another night (or more). If the coin toss said move on, we stuck a pin in the map to determine our next stop.

We had only 3 predetermined waypoints - the RV Forum rally in Moab, our kids' place in the MidWest, and home; No dates associated with them.
You must log in or register to reply here.