I-70 through Colorado this Summer

Due to the fire damage around the Glenwood Canyon area last year, Rain is causes flash flood conditions which make travel between Rifle and Vail a bit unpredictable. Several other areas in Colorado are also experiencing Flash Flooding because of the fire damage.
IF planning travel on I-70 or any other route through Colorado mountains, you want pay close attention to the road conditions report from Colorado Highway website.

And of course, the I-70 Construction project between I-25 and I-270 keeps travel through the Denver Metro ever exciting.

A couple of routes for I-70 to by-pass the Glenwood area:
Eastbound, exit I-70 at Rifle, and take SR-13 north to Craig.
Option 1, at Craig is to continue north on 13 to I-80 in Wyoming, then East on 80 to Laramie or Cheyenne.
option 2. at Craig, take US-40 Eastbound. At Kremmling, you can take SR 9 South to Silverthorne and pick up I-70, again, just West of the Tunnels. (You can stay on US-40, over to East side of the Tunnels, but between Winter Park and Empire can be pretty intimidating for an RV.)
Westbound the same routes work, also. But again, US-40 between Idaho Springs and Craig is NOT for the faint of heart.

I-70 was closed at Silverthorne for a while, too. There are several areas around the state where flooding across the road has occurred, leaving debris and forcing a shutdown for a while. Last word I heard is that I-70 in Glenwood Canyon (near Glenwood Springs) is closed at least for the weekend, due to mud and rock slides (huge area of the road covered in rocks and mud), plus the potential for more of same.

Poudre Canyon (northwest of Ft Collins) flooded a week+ ago, ripping out some homes and killing four people -- and they had evacuations yesterday for a while. Also there were warnings to use caution on U.S. 34 through Big Thompson Canyon (west of Loveland) fro flash flood warnings.

We had thunderstorms and a nice rain last night (first time in a month for us, 7/8") and forecasts are for much of the state to get rain today, somewhat less tomorrow.

So I'll add to Lars' warning that most anywhere in the high country might get closed for a while, and many areas are subject to flooding, mud or rock slides, etc., so check road conditions.

As of this morning, I-70 is closed "Indefinitely" between Rifle and Dotsero - exits 87 to 133.
If you're planning a trip that uses I-70 in the next week or two, It would be wise to plan another route.
Our son said that it took him nearly 10 hours in traffic to make the trip from Denver to Grand Junction. (a 5 hour drive under normal conditions.)

And, to make it even more interesting.
US 50 between Gunnison and Montrose is under a major construction project through April 2022.
Full closures are expected during weekdays.

Yeah, it's a cluster out here
good job on the warnings

Link to info on closure 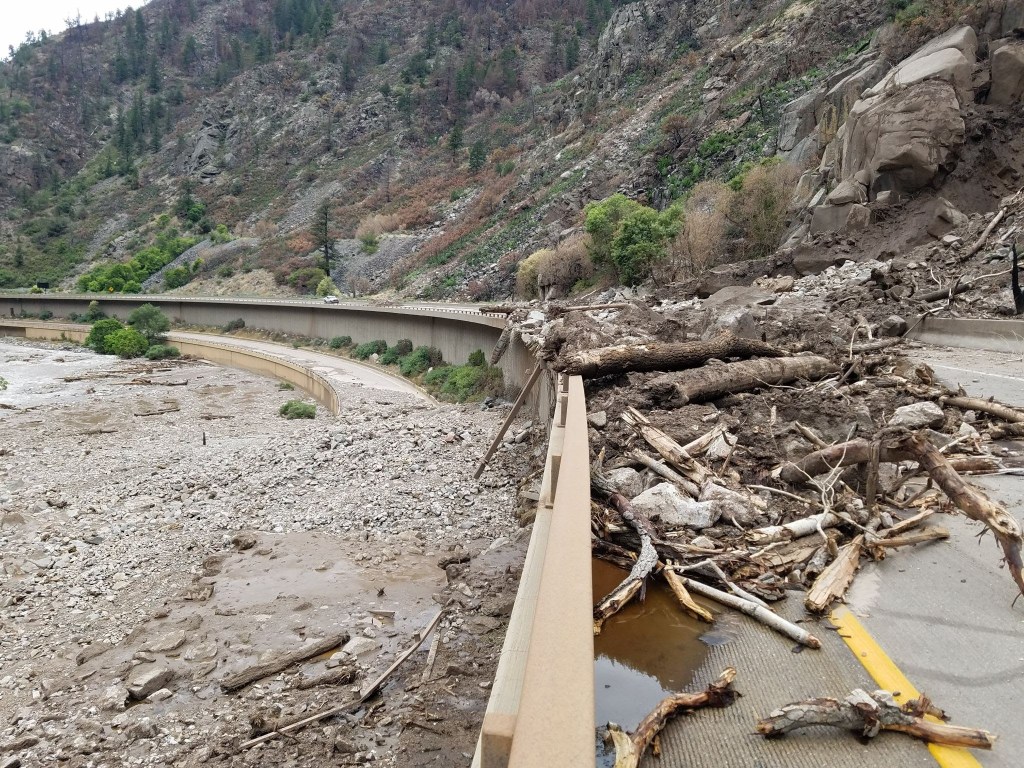 I-70 closure in Glenwood Canyon may last weeks; state to declare disaster

Colorado Gov. Jared Polis soon will issue a state disaster declaration for the mudslides that have shut down Interstate 70 through Glenwood Canyon for an extended period — which he said may last fr…

I am making this post a sticky so that it gets exposure as this is going to cause a huge traffic issue I believe.

Yes, and see the one in General RV as well.

I was looking a video from a fly-over the CDOT did. The place is a mess. I suspect it will be a year before the canyon is fully open, again. Even then it might be limited to one lane each direction for a while. The lower road bed looks to be undermined in several areas.
A friend at DOT told us last year, that after the Grizzly Creek Fire last year It was a foregone conclusion that I-70 was going to be under threat from flooding for a few years.

We're headed to Grand Junction some time in November. We'll be starting in Massachusetts. Hopefully, something will change between now and them.

mrschwarz said:
We're headed to Grand Junction some time in November. We'll be starting in Massachusetts. Hopefully, something will change between now and them.
Click to expand...

It MIGHT be fixed by then, but no guarantees. It's still possible that there could be more rain causing additional problems before long, though nothing in the 7-day forecast, but the monsoon could resume and bring more moisture from the Gulf, and they have yet to assess the current damage. Also, in November it's possible to have avalanches (yes, even on I-70) -- it's happened before, and not necessarily near Glenwood Springs, so you'll just need to keep up with conditions, perhaps using the links in above posts.

mrschwarz said:
We're headed to Grand Junction some time in November. We'll be starting in Massachusetts. Hopefully, something will change between now and them.
Click to expand...

Watch the weather. November tends to get “winter”
L

Construction has been paused on US50 until I-70 re-opens, which won't be any time soon. 50 is fully open to two way traffic until then. The article also has a link saying US550 (Million Dollar Highway) between Ouray and Silverton will be closed starting August 9 for power line work.

richclover said:
You might consider I-80 to Creston Junction, WY, then WY 789 south to Baggs, CO 13 to Rifle, I-70 west to Grand Junction.

Watch the weather. November tends to get “winter”
Click to expand...

That is a good route. We have run it a few times, each way. There are a couple of stretches of 13, where it is a bit narrow, with no usable shoulder, and WY 789 is a little rough near Baggs. But it is good and solid. From out house the change in distance between I-70 and this route isn't significant. It costs a couple-hours due to differences in speed limits when 70 is open.


When Winter starts coming around, I-70 is going to be a mess. I-70 will likely be one lane each way through Glenwood canyon for much of the next year, once it opens.

Checking tonite's news, it appears that some chunks of I-70 are no longer there, so with no estimate on how long 'til reopening, speculation is that it will be months, at best, maybe one lane each way a little earlier.

Another item wourth mentioning.
some GPS units may try to re-route over Independence pass on US 82.
This is a bad idea.
From the CDOT website:

SAFETY ISSUE
CO 82 Independence Pass should not be considered an alternate route, NO CMV or Vehicles over 35' allowed. Delivery vehicles, RVs and trailers should not use use Independence Pass to bypass the Interstate closure. Route is a narrow, high mountain roadway with tight switchbacks and heavy tourist traffic.

Mind this warning. While vehicles with lengths of 35 feet or less are allowed on the road, it is not very safe if you are not an experienced mountain driver.

To add to what Lars reported, the news has, for the last couple of days, shown a semi truck and a bus on rough, dirt roads, with one or more wheels off the road, on the edge of rolling down a cliff or embankment, such that they had to be towed out. Those drivers were fortunate that they didn't go over the side.

Apparently they were trying to find alternate routes better than what CDOT has posted on their web site and what has been shown on the news, basically going U.S. 40 through Steamboat Springs, whether via Waze, Google maps or a GPS. CDOT has explicitly said DO NOT use Waze or Google maps, because they'll get you in trouble.

In addition to those large vehicles, apparently there are a number of small towns off the beaten path who have experienced a major infusion of tourist traffic trying to find a better route. Trouble is, many of these towns on NOT on a through path, and even the ones that are through routes, a large portion of that is on rough roads, often only suitable for 4WD vehicles.

I mention all this to warn folks traveling I-70, even if you're in a car:
Take the CDOT recommended route.
There just are not many alternate routes available through these rugged mountains.
R

Looks as made it will be open this weekend. 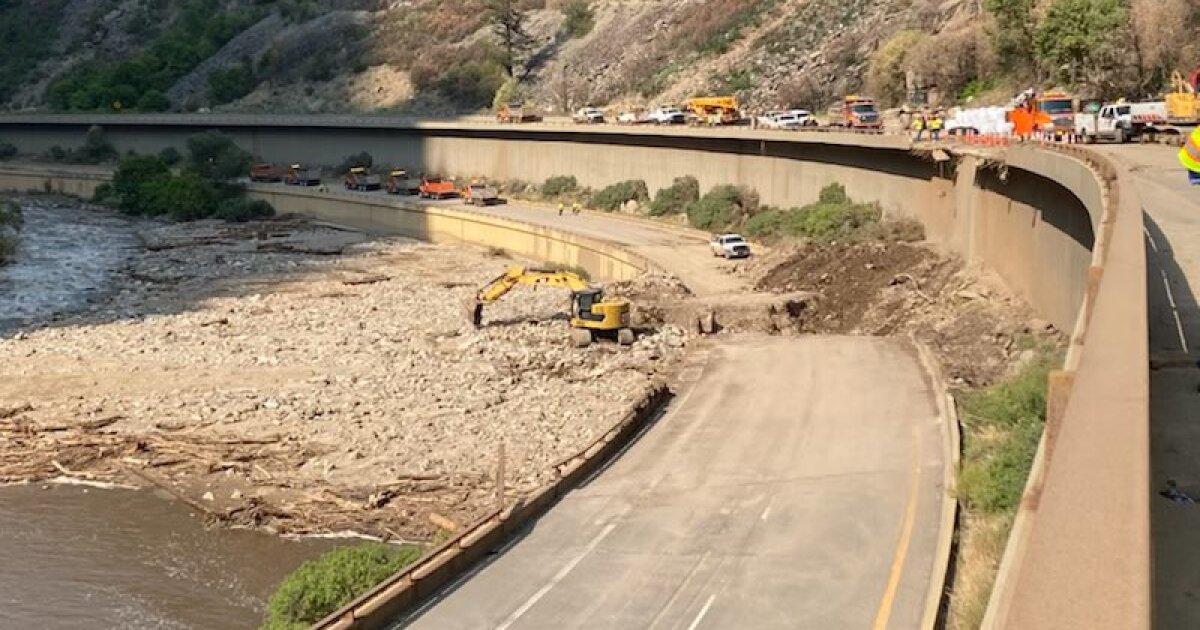 Interstate 70 through Glenwood Canyon will partially reopen on Saturday afternoon following mudslides that caused "extreme damage" to the roadway in late July. A short section will allow just one lane in each direction.

That's great, but the video shows lots more debris ready to come down the canyon if they get any more rain.

CDOT does say that, but many things could delay that, so be prepared for some new announcement as it gets closer -- and yes, I'm a pessimist in this case. Hope it goes as planned, though.

Latest from CoDOT
I-70 in Glenwood Canyon is OPEN between Exit 116 (Glenwood Springs) and Exit 133 (Dotsero).

I would suggest not making travel plans that rely on getting through Glenwood Canyon in any particular time frame.
You must log in or register to reply here.