I got a free trailer! Now how do I fix the wheels and tires?

The friendliest place on the web for anyone with an RV or an interest in RVing!
If you have answers, please help by responding to the unanswered posts.
See posts with no answers
O

Hi forum. A coworker just gave me his trailer that's been collecting dust in his back yard for about 7 years. The trailer is old as dirt, but it actually still smells fine inside, and although the outside looks faded and screwed up, there aren't any dents or dings in it anywhere, so I think it might clean up well, maybe with a good sanding-down a fresh coat of paint...

One of the problems with it though is the wheels are some type of crazy old type of RV wheel that I'm not familiar with. I want to be able to not only change the tires, but inspect/repack/replace the axle/wheel bearings, so that it's at least road-worthy. Can anyone give me some information or a diagram of these type of old wheels and axles? I took some pictures, but let me know if you guys want any other/different pictures of things. Thanks for the help! 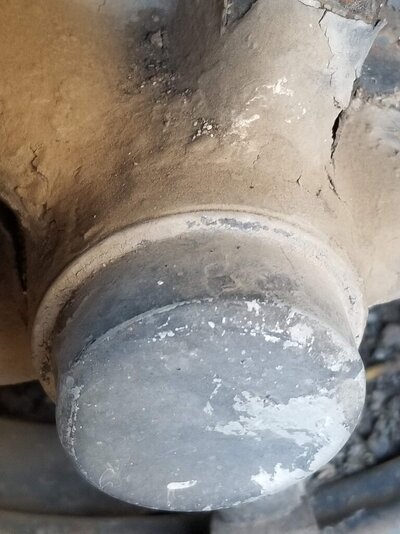 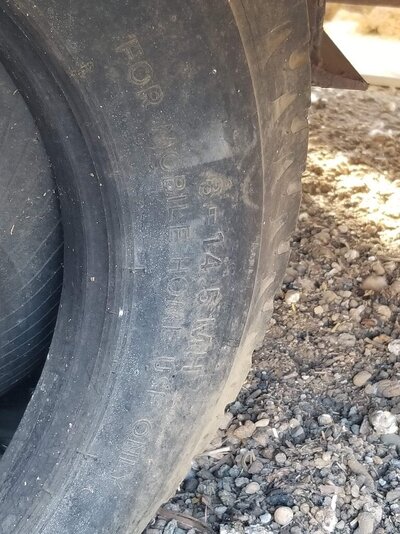 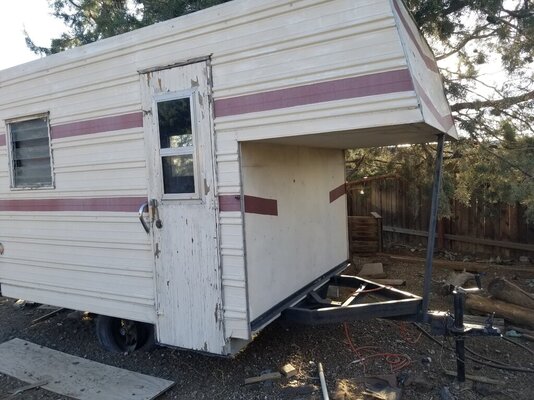 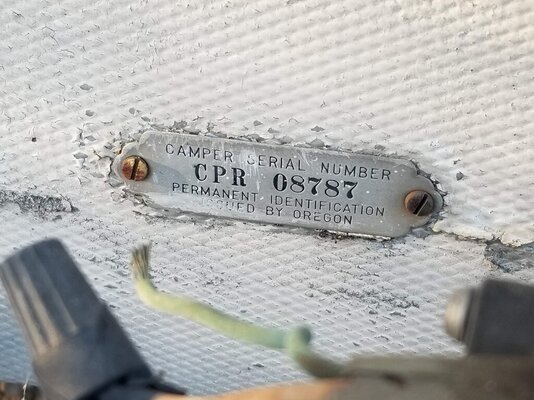 Welcome to the forum.
That was nice of you to take that trailer off his hands.

Have you looked inside for any water leaks and damage

Saved your buddy the dumping fees, i hope he bought the beer. Its an rickety old truck camper mounted on some sort of frame. With friends like that you dont need enemy's
C

I think those wheels and axles are the type used for mobile homes, not really for RV trailers.

We'd love to help you, we just can't see it. If you are determined and money is not a concern, I would look into swapping out the whole axle for modern technology. Secondly, that trailer has a very high probability it will tow terribly. I guess if you are looking to drag it someplace close for a hunting cabin (better than a tent, maybe), I can see it. We hate to spoil any excitement that you might have for getting a free trailer, truth be told, your friend would have to pay someone to take it. If you are adamant about this project, we'll help you spend your money, absolutely no guarantees

Ok it looks like the rims are removed by the bolts at the end of the spokes.

The cap in the middle of the spokes pulls off. Or prys off and there is a castle nut with cotter key inside it likely caked in very old grease. Remode cotter key, Remove Nut, Remove Hub assembly, Clean and repack bearings. If this unit does NOT have brakes (and it appears it does not) consider bering buddies.

The spoke/hub assemblies look like they need replacement... A good tire store can help you with that but the result may be different than OEM.

This iss a guess. but that was bult as a "SLIDE-IN" (to a pick up) trailer and then modified by bolting it to a frame. Very "Done It Myself" look to it. .

I also think that it was a slide in and the frame and door were added.

I think that I can read an 8 on the tires so they may be very small. Be careful if you move it although that may be the width.

That type rim & wheel are obsolete and look to be in bad shape anyway. Throw the whole axle assembly away and get a new one. You can get a new modern 3500 axle with electric brakes and springs for about $500 and you need new wheels and tires anyway.

Gary RV_Wizard said:
You can get a new modern 3500 axle with electric brakes and springs for about $500 and you need new wheels and tires anyway.
Click to expand...

And this will put it over for what it’s worth IMHO.
R

Unfortunately he didn't do you any favours unless you like playing with this kind of thing.

So, I'm a vehicle appraiser by trade.....and there's a joke that we kind of toss around now and then...."There's nothing as expensive as a cheap German car". That sort of applies here.

Like the guys above have mentioned, it will take a fair amount of money to get it roadworthy axle wise, and then you still have something you have a bunch of money locked up in but can't give away. That said, if you have a piece of unrestricted land and want a place to boondock in, you could put it up there permanently and get your use out of it, then scrap it when you're done. I would repack the bearings, put a cheap set of used tires on it, and haul it up there.

I'm sure, now that you've read the comments, your initial enthusiasm has wilted a bit. That wasn't anyone's intention. Discouraging your from pouring a fortune down a rabbit hole was.
M

My buddy had one just like it. He used it as a portable shed, something he hauls around on his land to get his tools closer to what he's working on. When his kids were younger it was their playhouse. His exit plan when he moved was to set it on fire then put the remainder in a pit.

I'll tell you just like the people that lost their license and use the alley to push their grocery cart to their house full of whatever. They never take it all the way to their house. They want to leave it a couple streets over. Don't want to HOG up or make their alley dangerous with moving grocery carts.

I say TAKE IT BACK.

They huff and they puff, but I stand my ground. They take them back to the store and you should too.
You must log in or register to reply here.