The friendliest place on the web for anyone with an RV or an interest in RVing!
If you have answers, please help by responding to the unanswered posts.
See posts with no answers
E

Hello. I'm looking for some help tracking down replacement arms for the awning on my 2012 Keystone Vantage. Dometic no longer makes the curved arms I need, so I need a different solution. I can't be the first owner to have this problem. Anyone else out there solve this yet?

Although maybe replacing the awning altogether would be better.
E

I would still need curved arms to follow the contour of the camper. The awning and roll tube are not damaged.

This is the same setup Bigfoots have and someone had the same problem. Their lower arm segments were still good, just the upper forward arm damaged. They found that Dometic has straight arm kits that you can buy and reuse the lower (bent) arms (if still good).

Here is the result when the straight uppers and rafters were used with the bent lowers on a Bigfoot.

Dometic sent BigfootRV scrambling when they went to order more awnings and were told that Dometic had decided to discontinue them. Blocking has to be bonded in during construction so you cannot just switch to something else. Carefree of Colorado came thru with something that works for the factory.

Personally I like awnings with arms and rafters. Americans have the desire for the easy life and so they want a push button awning so that is all that is sold now. In Australia the A&E 8500 awnings are still popular and being installed by caravan manufacturers. 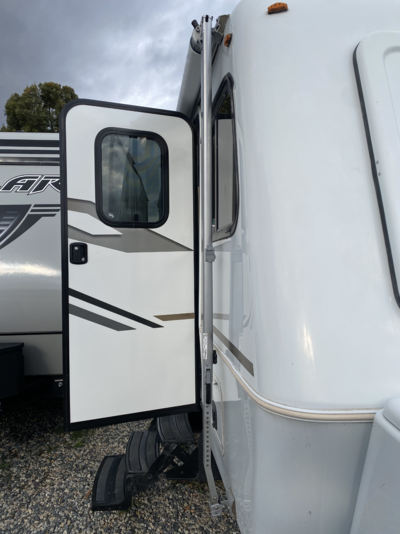