I'm living in South Florida now (Palm Beach), after moving from north central (Ocala area). Yesterday & early this morning our county got trampled by Ian's main feeder band, with several smallish tornadoes and really heavy rains, but not much surface wind. Of course, a "small tornado" isn't so small if it's in your yard, so that's not much consolation if your roof gets torn away or your car flipped over, as happened in a few places last night.

Oldgator73 said:
Hurricanes, unlike tornadoes, earthquakes and floods, are easy to avoid. You get plenty of warning. J
Click to expand...

True except for the earthquake part.

You get plenty of warning, but projections as to where it will go are SWAGs at best. And if you are on a peninsula like Florida, any alternate place you head for may well end up being the target as the storm moves north..
B

jymbee said:
True except for the earthquake part.
Click to expand...

When the ground starts shaking is not enough?
L

Babe2201 said:
When the ground starts shaking is not enough?
Click to expand...

By then it's too late to do anything except duck and hold on for the ride.

Babe2201 said:
When the ground starts shaking is not enough?
Click to expand...

Lou Schneider said:
By then it's too late to do anything except duck and hold on for the ride.
Click to expand...

When we lived in Tokyo we got worried when we didn't have earthquakes. That's tension building up for an ever bigger one when it happens.

My wife and I usually have about 3 months worth of food and water on hand. But it's not because of emergencies. It's because we like to eat at unusual hours. When we do go shopping, it's usually just to top off the freezer or the pantries. Although I have a fetish for "Mr Goodbars", so there is a rather large amount of those in the freezer.

Ex-Calif said:
When we lived in Tokyo we got worried when we didn't have earthquakes. That's tension building up for an ever bigger one when it happens.

We'd get small quakes almost every day.
Click to expand...

Good point. We haven't had any "good" quakes in So Cal for a while. That's a little nerve wracking.

I think that the tendency to stock up on water and other things right before a storm is at least partially a psychological thing. Once you've checked your generator, made sure there's nothing left in the yard that will fly around, and done all the other things you have to do to prepare, all that is left to do is wait. Going to the store to buy just a few more supplies makes you feel productive during the waiting period.

Reinigm said:
Good point. We haven't had any "good" quakes in So Cal for a while. That's a little nerve wracking.
Click to expand...

One of the countless reasons I am glad to be out of the SF Bay area. A couple of the most dangerous earthquake faults in the world are there and they are now overdue!

I wonder what it will do to the ridiculous home prices in SF when it comes.

So far here, near Orlando, we have had lots of rain and just a few wind gusts. Tonight into tomorrow will be when it gets bad here.

I just set up our EcoFlow Delta Max and Smart Generator so that our TV will continue to work if the power goes out. (We have a 5G hotspot for Internet). The EcoFlow products are expensive, but really nice. It is so simple to just plug the generator into the battery pack which will automatically start the generator when the charge gets low. I bought the EcoFlow products to take to our local model rocket launches using the possibility of a hurricane as an extra excuse to get them.

I am pretty sure we will lose power and it may take weeks for it to be restored. I have a larger generator that I may use to power the smaller refrigerator in our garage.

Also have the RV and its generator if we want to escape into an air conditioned area. We could just go stay with someone else, but if it looks like power might be out for a while I may see if we can stay in the RV at a state park for a while. I am working from home now, so home can be wherever my hotspot works.

jadebox said:
So far here, near Orlando,
Click to expand...

I hear the hurricanes normally don't reach that area--at least not very strongly.

Well, it's about as far from either coast as you can get in Florida. A major hurricane coming into Tampa and hitting Walt Disney World could still be really strong when it gets there. But, they designed everything there to withstand strong winds. I don't recall any significant damage there after Charlie which I think was still a Cat 2 storm when it hit the area.

BTW, others may get the impression that hurricanes are a routine experience for people in Florida and that is partially true.

But, Florida is big. There are about 100 countries smaller than Florida. And major hurricanes are relatively rare.

Walt Disney World has only closed a few times over 50 years because of hurricanes.

I personally have lived in Florida for more than 50 years and the houses I have lived in have never received any significant damage from hurricanes. Only one storm, Charlie in 2004, was really scary for me (Ian may make it two tomorrow).

jadebox said:
But, Florida is big.
Click to expand...

I was all over Florida last Dec. Was in Orlando also, and many of the smaller towns in the area. Okay, really St. Cloud, I had to walk across the street to get to get to Orlando (and often did).

Big? I guess you didn't yet drive through Texas! .

More likely because it was the largest undeveloped area of cheap swampland Disney could find. They went to great lengths to conceal their identity and kept their plans under wraps until they gathered the real estate they needed.

Lou Schneider said:
They went to great lengths to conceal their identity and kept their plans under wraps until they gathered the real estate they needed.
Click to expand...

Yeah. I heard about that too. I think it was @SeilerBird who explained that to me when I was there in FL.

IOW, they played tricks so they wouldn't piss-off too many people at once of those who lived in that area.

Lou Schneider said:
By then it's too late to do anything except duck and hold on for the ride.
Click to expand...

I've been through a couple of quakes since I've lived in the motor home. It's an interesting feeling to know there's an earthquake but to not be worried that your "house" would fall down around you. Relax and enjoy the ride.

We still have power and internet. One tree is down and a section of fence was knocked over in our yard. The yard is covered with debris. There is flooding in our yard, but not near the house. All in all we are in so much better shape than I had thought we would be.

The same, unfortunately, is not true for many in Central Florida. One of my coworkers reported that his home is flooded. And water in the area will continue to rise.

Well we just had our first "Hurricane" induced problem - LOL...

Neighbor came over and told me a tree was sparking. Sure enough a dead pine (on county property) was just touching the wire. It was sizzling periodically as the 16mph winds rocked it to and fro.

I called Florida Power & Light - The first time I called I selected "tree trimming" from the phone menu and they said, "No tree trimming requests until the hurricane is over" - I dialed back and selected wire down. I spoke to a human who said they would send a lineman. I told her to make a note that we need a tree cutter and she did. A couple hours later a lineman showed up - no tree cutter.

He was a real piece of work and not concerned about the sparks or the small fire that kept popping up. At one point he said, "That's not a problem for us and it'll keep." - WTF??? I told him it was a problem for me and that I was gonna call the fire department next.

He said, "They are just gonna call us and fire departments can't make FPL do anything." He did say he would report the condition "up the chain" and they would probably send a tree crew at some point.

So taking matters into our own hands I have my kid go up the tree. We cinched a rope around the limb and used a come along to pull the tree away from the wire. The stupid thing was the lineman (with a bucket truck) watched us setting up the ladder and all and didn't even offer to help with his bucket - a$$holes.

We had just finished around 5:15pm when a tree truck showed up. Asplundh then made about 1 1/2 hours work out of that big limb and another limb in another spot that had broken but not fallen.

They've left all the debris on my property for my to section up and dispose of. Would be nice if they took it away. 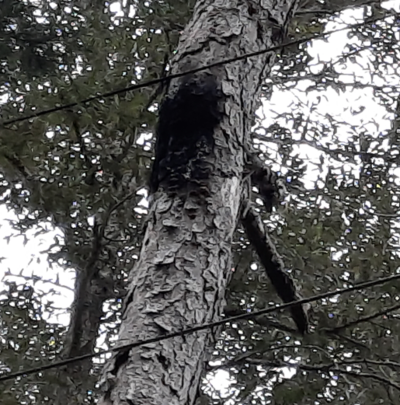 Looking for SeilerBird to report in. I don't think he's near the coast but I'm betting it got a bit breezy for him. Scary enough in a cat 5 rated house much less a fiver.