A little background. We have camped in tents and as we got older those weren't as appealing even with an air mattress etc. So we had stopped camping several years back.

Last fall we decided to get an RV. Our first RV was (this is a link) a small disaster. We had searched several, several miles from our home and wound up with a 2002 Monaco Monarch that was literally the closest RV to home.

Wes and Penny walked into the restaurant and joined us, complete chance, we hadn't seen them in months. In 2 days they were going to pick up their new trailer and then were going to sell their RV. We stopped and looked at it on the way home. They are the 2nd house down the road from ours.

Fast forward through some repairs and prep.

Do you remember your first trip? Excited and maybe a little nervous? That's how we felt. We had driven it to Sedalia and back, about 60 miles. We had new tires and fixed everything we could. Now we were leaving on a week long, 1000+ mile trip.

First day, Saturday, was a 4 hour drive to Branson, MO to Cooper Creek Campground. We were towing a 2018 Honda Fit on a trailer (CVT transmission so flat tow is a no-no). It was a smooth drive, mostly level roads, no big deal.

We fueled up at Breaktime outside of Warrensburg, MO. Its a truck stop / convenience store on the Hwy 50 and Hwy 13 bypass. Its clean, easy in and out. 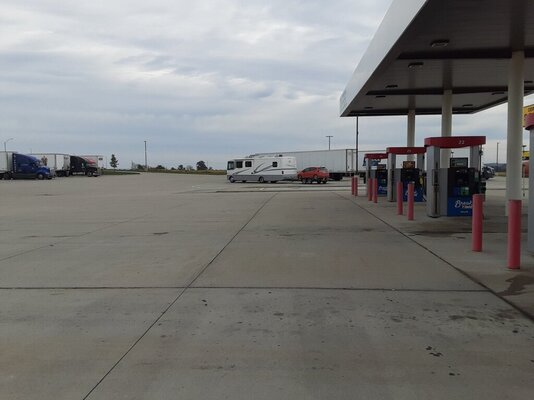 We pulled into Cooper Creek, checked in and setup pretty quick. Spot was level but didn't have any trees. That was ok as we were just staying overnight. Here are few pics to give you an idea: 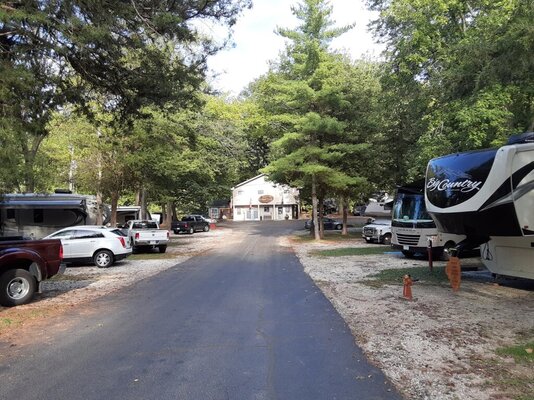 That's the office, if you turn right it goes back around. If you turn left there is a big parking lot and a boat ramp that goes down to the (very large) creek. Friendly staff and basics in the store. 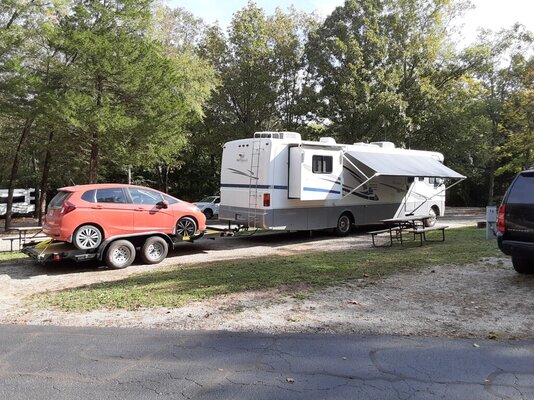 Most of the spots had trees as you can see, just not this one. Cable tv worked nice and was something I had not expected. But before we settled down for the night we went down to the docks.

This is Cooper Creek? I think its more like a river, anyway we saw people fishing, a dog on a kayak and met some nice people. I won't mention the older couple doing some serious smooching on the dock. 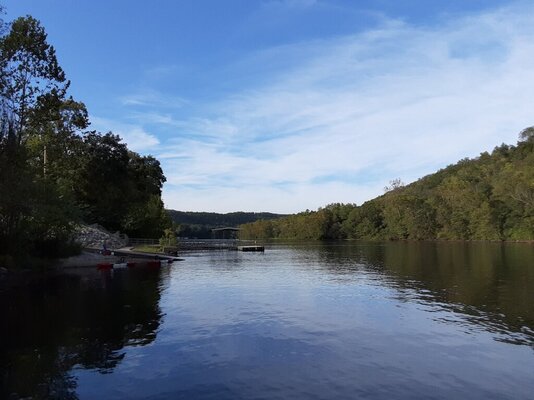 As it got dark we really tried the shower and hot water heater for the first time. We didn't know if a 6 gallon heater would do much. Holy Cow! It was hot and we found we never wanted for hot water. The 110 volt part is not working but the gas side works great.

We had replaced the mattress and we had slept on it before in the driveway. It was great! The next stop was Willow Beach just south of Little Rock Arkansas, about 4 hours. We would be staying there for 3 days and 2 nights.

It may take me a few days to post the whole trip so stay tuned. Short version, I started a new job, which has lots of overtime, second shift and I'm tired.

Great start! Hope you get some rest....

Sunday we got up and our destination was Little Rock, AR or more precisely Willow Beach State Park, which by the way doesn't have a beach, so the name is kind of misleading. It took very little to break camp.

As we left we started looking for fuel and I saw a sign for a state park and we decided to check it out as we had plenty of time and enough fuel for a while. Then we saw a sign for an overlook a head. So we kind of wandered off the beaten path to find this overlook. Heck its vacation, everything shouldn't be scripted. It's South Mountain Overlook, elevation 1386 feet on County road 415 near Marshall, AR.

We pulled over and found a nice view. Then we found people that lived just 20 or 30 miles from us and wound up talking for quite a while. Looking at the map we saw we could make one turn and wind up back on hwy 65. It turned out to be a tight turn but I managed. 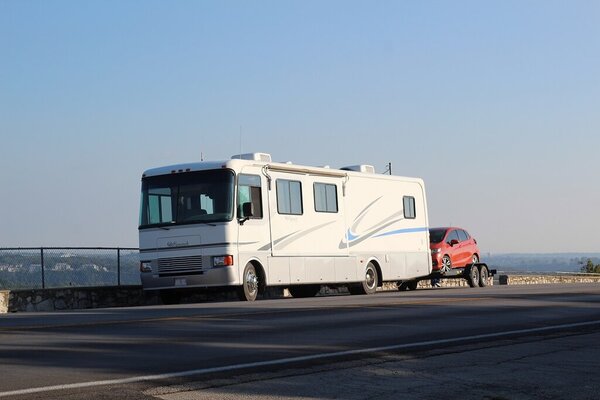 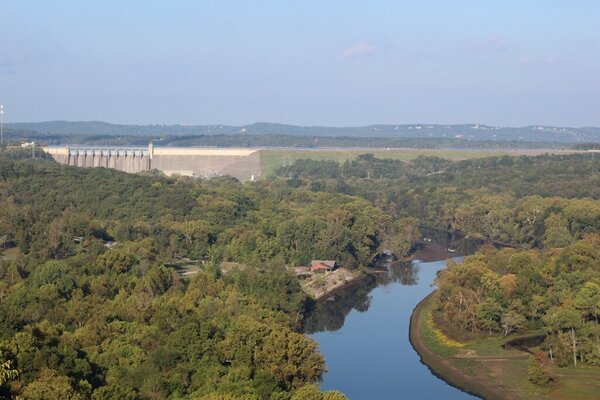 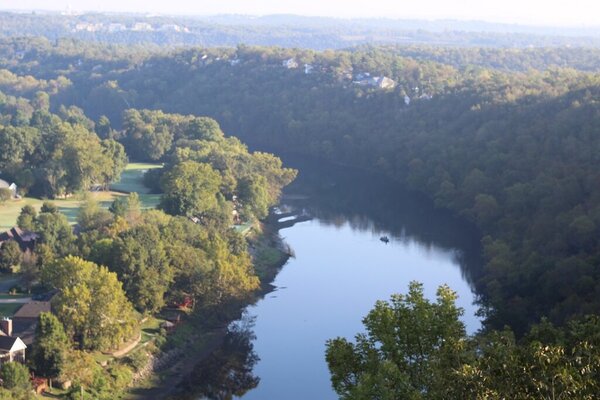 Then we started the slog. See 65 goes from where I work in Sedalia, MO to Tallulah, LA and it passes within 2 miles or so of the family farm. So we have traveled it many times. We knew it would be steep and winding. Well what we didn't know was the engine fan was going out. That's the fan that pulls air through the radiator when it gets hot, its got a clutch that is supposed to engage then the temp goes up. It didn't.

And lugging a 36 foot RV, trailer and a car up long hills generates heat, lots of heat.

As a professional driver I have nursed many a truck into the shop. Except we were going AWAY from my shop. So I did the best I could and watched the temp gauge.

Then came a hill it wouldn't down shift like it was supposed to. I topped the hill at 25 mph. I figured out that the drivers mat was waded under the pedal. At a good point I yanked it out and tossed it behind me, then all I had to deal with was the engine temp.

So I sped down the last part of the hill and flat and used as little throttle as I could to get up the next hill. Rinse, repeat, watch the temp gauge.

Then the exhaust gasket blew just north of Conway.

I couldn't help it, I started laughing, I blipped the throttle. The beast in the basement roared. We pulled into a gas station and added fuel and I checked to make sure it was just the gasket. It was going to be loud but it would be ok for the 50 miles or so we had left.

Bev's comment "Well you like a throaty engine." was funny, but I responded, "Not under my feet! And I kind of want a quiet ride in my RV." I freely admit some of the vehicles I have built were, lets say, louder than they had to be.

We pull up to the office at the State Park and I cut the engine so I could talk to the attendant. She was polite and didn't mention quiet hours or anything like that. I figure I wasn't the first to limp into a park.

We unloaded the car for the first time and backed into our spot. I'm afraid we weren't great neighbors, with the loud exhaust and all. Also we have a relative in the area and we took off to see her before it got really late, I had stopped a couple of times to check stuff. She's 92 and we were trying to make it easy on her.

We left her house at dark and we stopped at a great little place not far from the park called "Jose's Mexican Grill and Cantina" at 11100 Hwy 165. I had the loaded burger and they didn't warn you it was so large it needed 2 plates! Kidding, it was really good but I did take 1/2 of it home. Bev had the California Quesadia, I got a bite and it was good too!

Then to bed, we used the park showers, pretty clean, and got to bed as the next day we had tickets for the Little Rock Zoo. That's the next post.

Sounds halfway nice, and those are great photos, we may have to check out the area next time we head up to Arkansas

Close by Willow Beach is a COE park called Maumelle park. As you approach it, it seems to be in a residential area, but once you get inside the park, you'd never know. It's right on the Arkansas River, so you get to watch boat and barge traffic move up and down.

65 between Clinton and Conway was part of my daily commute for 14 years. I've stopped in that rest area south of Marshall a number of times when out on the bike. Was the rock shop open? Pretty interesting stuff there, if you're into rocks.

Little Rock Zoo is small but nice. It has wide paths to walk and lots of shade. It won't take a whole day to see everything but it was worth the stop. We want to go to the Nebraska Zoo next I think.

I was surprised that they had penguins. 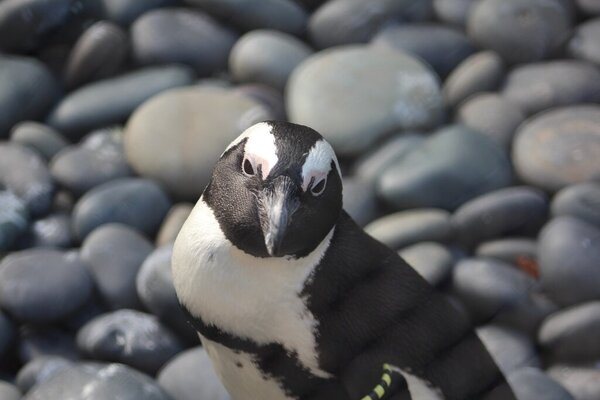 Multiple large cats, this pretty lady lay quietly and mostly with her eyes closed, but she did glance my way once. 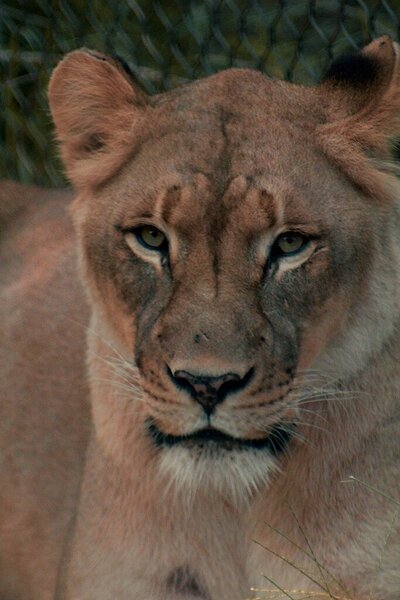 This one never looked my way, but seemed to be enjoying the day. 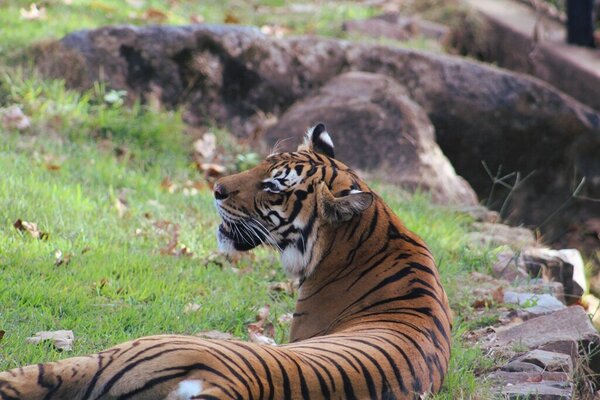 Animals that don't get the same fame as big cats or cute penguins were there also. 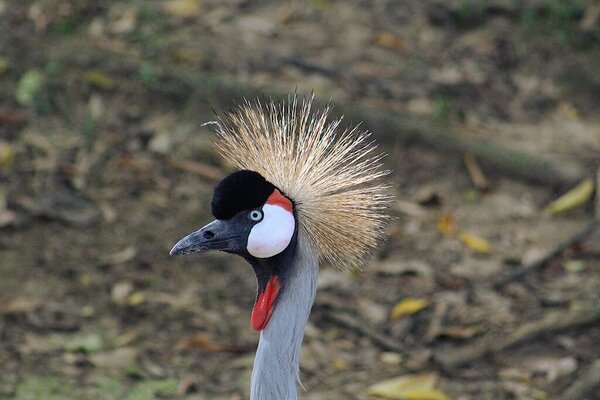 And of course the chimpanzees were hanging around. 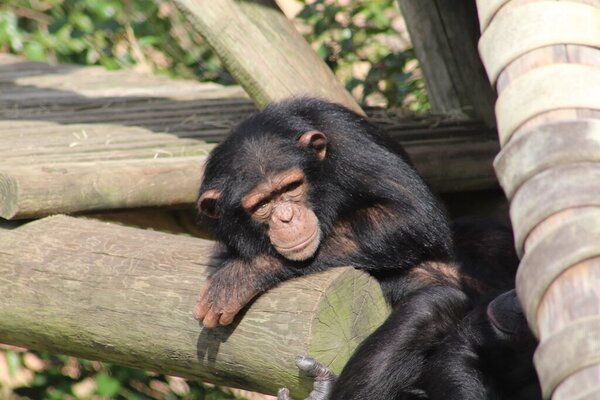 We ate lunch and did some shopping then retired to the RV.

I crawled under Tiny to confirm what I needed and took off to the largest Autozone store I have ever been to.

Many times the same part is used on multiple vehicles. The engine in mine is a Vortec 8100 which is also used in Chevrolet 2500 HD pickups of the same year. So while the catalog doesn't show anything for the Workhorse chassis, it does for the pickup.

They didn't have it.

Next door was the smallest O'Reilly's I have ever seen.

They did have it.

So I grabbed new studs to go with the proper donut gasket. It has a metal sleeve which was missing from whatever gasket they used the first time. I really think who ever did the exhaust just used what they had.

I had sprayed the studs before I left, PB Blaster. I got lucky in that all 3 came out fairly smoothly. If I had to drill and tap them at least I had room in this large chassis.

So here it is installed. The drivers side has the correct part in it. The white section is the new donut. I have never seen a stock Workhorse chassis up close but I think this one had an over sized exhaust system on it. the pipe diameter is larger going back. You can see it necked down and welded to fit at the bottom of the picture. 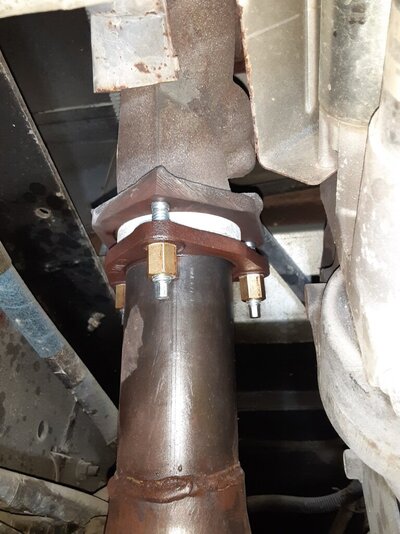 Beverly said it was quieter than it had been before, even before the gasket completely blew out. I think she is right.

We walk along the park and sat on a park bench, talked to another camper. Just chilled looking over the lake / river. 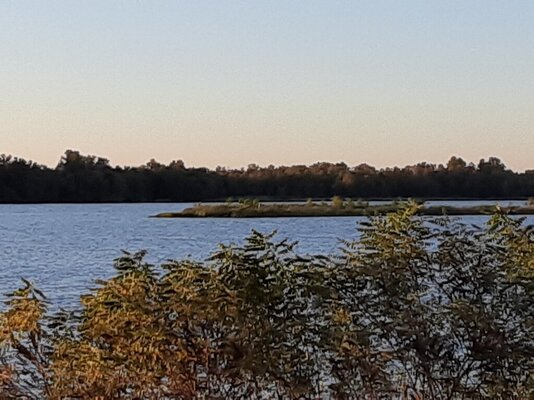 A good nights sleep and then we set off for Delhi Louisiana.
You must log in or register to reply here.