Please allow me to introduce myself... 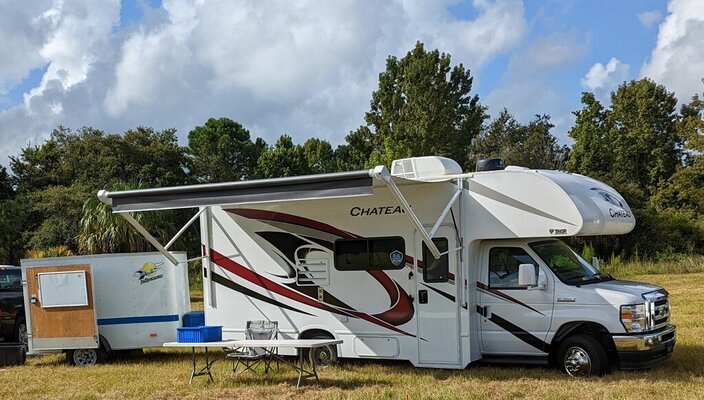 We were shopping for a used motorhome and found one locally that was just a couple of years old that we liked. Before making an offer on it, I decided to do an online search for other RVs available in our area that were about the same price.

The new Thor was just a few thousand more than the used one and was about $30,000 less than other dealers around the country were asking for the same year and model.

So, a bit suspicious, I took my wife to the dealership to see it. The sales person took us to the RV. It had a "Sold" sign on it. Now, I knew it was a "bait and switch" scam! But, it turns out that someone wasn't approved for a loan so it was available. We put down a deposit and picked it up a few days later.

I have added a TV to the bedroom and figured out a cool way to also use it outside (ours doesn't have the optional outside TV). I don't see us using the TV outside often, but my wife was disappointed that we didn't get the option.

We came up with several excuses for getting the RV. First if all, I recently learned that I will be working from home for a while longer so being able to take our "home" to new locales will make life more interesting.

Also, it'll make a nice guestroom when our grandkids visit.

And, we often attend hobby rocket launches out in the middle of open fields far from air conditioning and a restroom. The photo above was taken at our local club's launch yesterday. It started to rain heavily and unexpectedly early so when leaving, I had to drive across the soggy field and through a muddy ditch. We had already had to help get a car unstuck from the mud. So, I was a bit nervous as I left, but the truck didn't even pause as it passed through the muddy ditch. I did have to rinse off the trailer hitch which had scooped up a large batch of mud.


Sometime soon, we will camp out for a night or two in our driveway. Then we will start getting adventurous and check out some state parks nearby. We are in Central Florida, so there are lots of cool places to explore that are within a day's drive of home.

Plus, of course, we will attend more rocket launches around the southeast (and, maybe, farther away from home).

Hi and welcome to RVForum. And CONGRATS on the new coach!

I had just read a review of the new Rolling Stones documentary right before creating that post.

I've been around for a long, long years...

Welcome aboard JadeBox - Nice looking rig. I like the towable for the toys.

Ex-Calif said:
I've been around for a long, long years...

We don't really need a larger trailer, but my wife thinks the trailer looks too small behind the RV. So, aesthetics might force me to upgrade. Darn

Ex-Calif said:
I've been around for a long, long years...
Click to expand...

Stole many a man's soul and faith...

jadebox said:
We don't really need a larger trailer, but my wife thinks the trailer looks too small behind the RV. So, aesthetics might force me to upgrade. Darn
Click to expand...

Bigger box more toys. Then the RV will look too small, then bigger RV.

I've considered getting a larger trailer that can carry my car. But it's an EV and rather heavy for its size. I'm not sure that I can - or would want to - tow that much weight. My brother has an older Honda Fit that my parents used to tow behind their RV. If we decide we need a car on a trip, I may ask to borrow it in exchange for helping to keep it running.
You must log in or register to reply here.