solar now in Cougar, Keystone Rvs. OTG is an option.. anyone look at this?

The friendliest place on the web for anyone with an RV or an interest in RVing!
If you have answers, please help by responding to the unanswered posts.
See posts with no answers
M

Below is a graph using the cycle life and capacity data from their datasheet I have for flooded T105's. The "50% bump" is actually closer to 30% (this moves around depending on the battery). The left Y axis is for the cycle line and the right Y axis is for the total delivered Ah lines. The delta between the different discharge rates is Peukert effect. 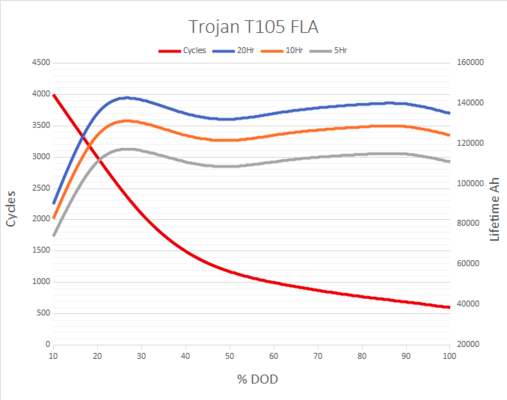 Different batteries will of course have different responses but the topic of discussion here is the T105.

it doesn't tell the full story because that's under lab conditions.

It's all we have. It's impossible to empirically test for every possible operating scenario. By extension then, it would be similarly impossible to target a specific DoD and expect to realize any tangible benefit in RV service.

you often don't have enough charge time to go from 0% to 100% charge between discharges,

Can't disagree with that, but that's not a battery problem. If you start introducing additional operating variables then the whole model falls apart, across all operating parameters.

"Charging the batteries at this level, or before 50-percent DOD, will greatly promote longer service life."

"Promote" seems a bit inspecific. What is "service life" - cycles? Years? What is "greatly"? Sure, between 50% DoD and 100% DoD there's a 2X difference in cycle life. That's "longer" for sure. But cycles don't run your stuff, amp hours do. I totally get, and agree that when you play around 80 to 100% DoD you're betting a lot on more precise monitoring and full charges between cycles. Ask the boat and solar guys about partial state of charge, that's a big one. Sticking to >50% allows more margin for error and varied operating conditions. The question then becomes if the system can adequately operate across that range. You can accommodate for system issues through DoD margin. But that's not a battery problem, it's an equipment one.

they're completely contradicting every manufacter's recommendation when they tell anyone else that they can routinely drain their batteries to 0% DOD without greatly shortening the life of their batteries.

Re-read my previous posts. One has to define "life". If you run your batteries dead you will absolutely get fewer cycles out of them. But it's the Ah you get over those cycles that does the work. It's purely a system decision as to how often, how deeply and what calendar life one expects or requires. I'm not advocating waiting until a battery is dead before charging it as a matter of routine use, even I don't do that. Not because I'm worried about "shortening" my battery life, but more practically I like to have some reserve of energy for running my stuff in the event I can't charge or some unexpected use arises. That's it. So this "discussion" here isn't so much predicated on the idea that 100% DoD is a recommended use model, it's about the notion that beyond a certain DoD there is battery "damage". *All* use including non-use is wearing the battery, so it becomes a strategy of managed decline just how a battery is used before it dies of other causes. Cost per Ah isn't usually a primary consideration here but the most cost efficient battery is one you've worn out through use than one that has been "preserved" through light cycling, and it's unused capacity taken to battery heaven when it ultimately craps out and gets recycled. These aren't collectors items or heirlooms and basically if you don't use it, you lose it. My advice is simply don't be afraid to use all your battery if you need it, it's what you paid for and it's what they're made to do.

No opinion one way or the other on solar, to me it's just a tool in the tool box. If it solves a problem then the cost is somewhat secondary, and it does seem somewhat specious to cite efficiency or return on solar in an RV, which is about the least cost efficient thing you will ever own (or is that a boat, or a plane?). Personally I would rather park in the shade than roast in full sun to make my panels happy.

Mark_K5LXP said:
Can't disagree with that, but that's not a battery problem. If you start introducing additional operating variables then the whole model falls apart, across all operating parameters.
Click to expand...

I don't see how that matters. We're not formulating a research paper here, we're discussing how deep cycle batteries perform in real world situations. And in real world situations factors like solar on an RV probably not being able to recharge a deeply discharged battery in the 4 or so hours of good sun available matters a lot.

That's an interesting point. And both Trojan and U.S. Batteries use passive voice in their declarations. "50% (or less) discharges are recommended" instead of "We recommend 50% discharges" etc.

Still though, with all the real world considerations, including the other factor you mentioned: when a battery reaches 0% DOD in an RV it's likely to keep going way into the negatives before it gets a charge, which damages the battery in every sense of the word. I'm surprised BMS's, which would hard cut off the batteries, aren't more common with lead acid batteries after all these years.


Mark_K5LXP said:
My advice is simply don't be afraid to use all your battery if you need it, it's what you paid for and it's what they're made to do.
Click to expand...

I get that. Hopefully you also mention that you're contradicting the advice of the manufacturer though.
Last edited: May 26, 2022
M

I'm not contradicting anything, I'm citing manufacturer data. I don't necessarily disagree with the "optimum life" statement other than it's inspecific. I walk the talk, I wouldn't tell anyone to do something I don't do myself and successfully so for decades. I totally get that not everyone will have the knowledge, intuition and interest to operate their systems to the edge of it's limits. Some folks are content to operate their systems on the "safe" side and accept the service they get. That's fine, but in deference to those that just want to run stuff in their camper it doesn't help to spread misinformation about how only half your battery is "usable" or going below 50% is "damaging" them. That's a lie. Achieving what is termed "optimum" life which at best amounts to a less than 10% advantage under specific conditions is a nebulous argument. I think if you offer most users the option of "optimum" life vs not having to anguish about the battery monitor and shutting things off in fear of "battery damage", folks would be far less intimidated using their batteries.