Don - If you get over to the east coast I can highly recommend the American Police Hall of Fame and Museum. Very inexpensive and very cool. Lots of displays of home made pistols and shooters. Some very creative.

There is also a free shooting range. 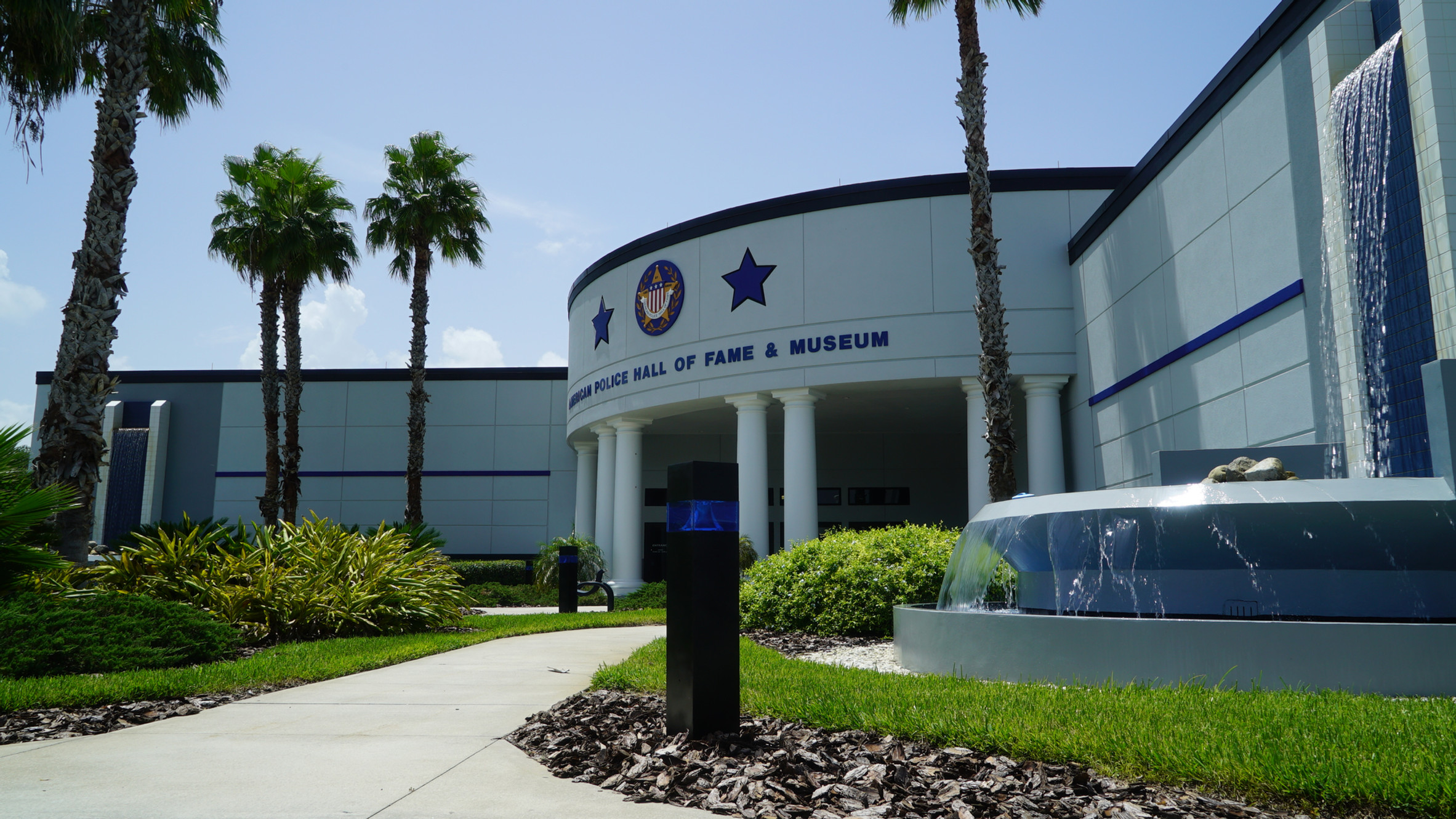 Just up the road is the Valiant Air Command Air Museum. Also very inexpensive and worth a look see. I am planning to volunteer here on some warbird restorations when I get retirement under control. 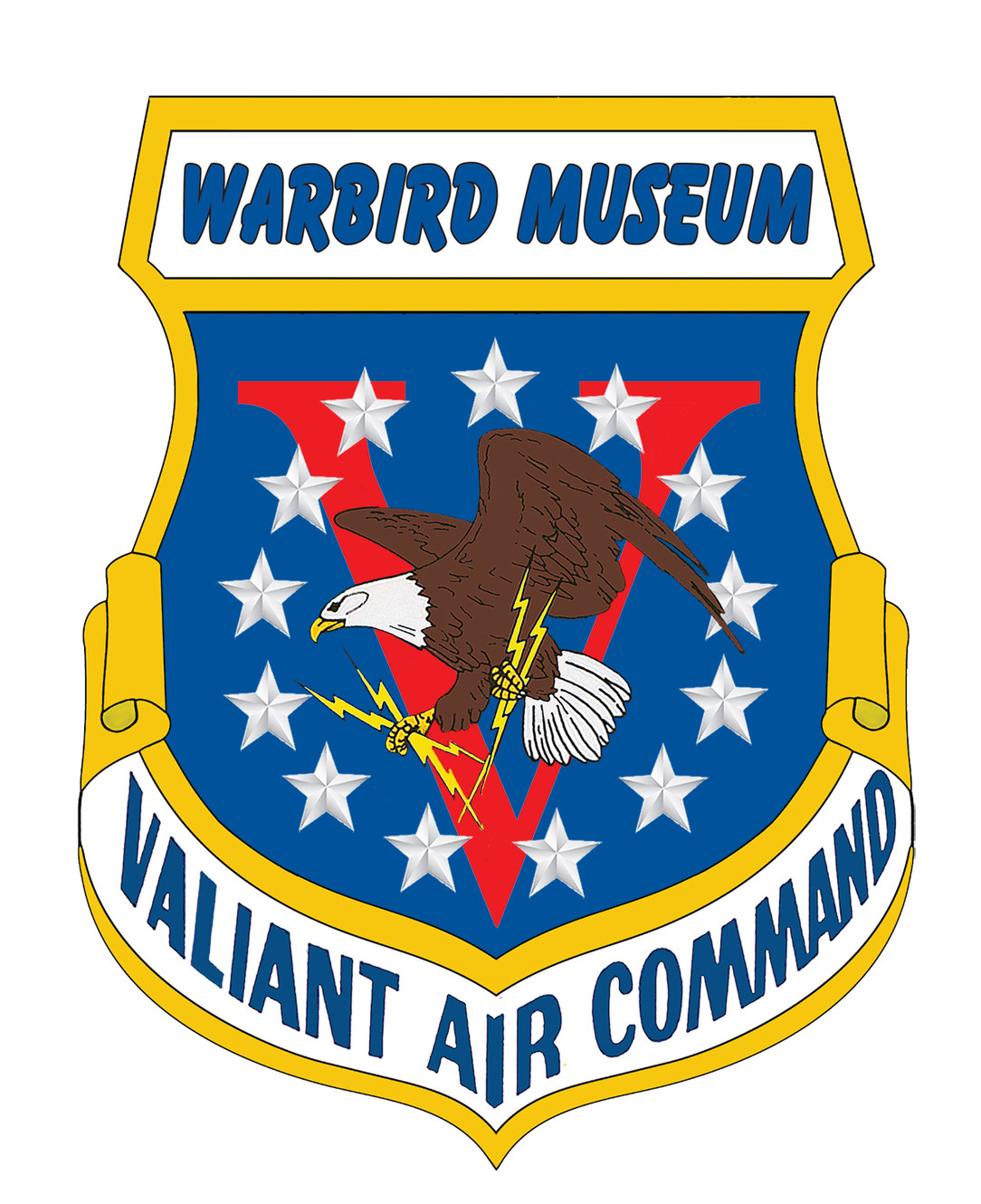 Location
Could be anywhere. Originally from Ohio. Go Bucks!

Pretty sure you meant Titusville.

I often stay at Myakka River State Park, east of Sarasota. The park store is along a river that dumps into the shallow lake there. NOT a swimming lake because of all the alligators. Often, there are a couple of big alligators that lie on the bank very close to the store. They don't bother anyone, but they are very impressive because of their size.

While I was eating my ice cream cone, I watched a foreign national tourist running back and forth to this 10-12' big alligator and slapping his tail with his hand while his wife was taking photos. He did it quite a few times because his wife was having trouble getting a good shot. He attracted a crowd, and pretty soon we were all rooting for the alligator, who was really just trying to get a nap in the sun. Guy and his wife finally left, and alligator went back to his nap.

DonTom said:
I hope not. Just leave the snakes alone and they will not bother anybody, venomous or not.

Yeah, there are rare accidents, but venomous snakes are not nearly as deadly as bees. Or lightning strikes.

Normally I would agree with you, but telling rural 6th grade students to stay away from a creek doesn't always work well. Three students had been bitten, although none died, when the school superintendent ordered the cleanup. Also keep in mind this was in the early 50's, and medical treatment was nowhere near as good as it is now.

"Each year, an estimated 7,000–8,000 people are bitten by venomous snakes in the United States, and about 5 of those people die. The number of deaths would be much higher if people did not seek medical care. Workers are far more likely to suffer long-term injuries from snake bites than to die from them."

A venomous bite is called an “envenomation.” Although death from venomous snake bites is rare, a worker with a severe envenomation or allergy to snake venom can die from a venomous bite

NY_Dutch said:
when the school superintendent ordered the cleanup.
Click to expand...

IOW, if there was no clean-up, and the snakes were left alone, most likely, nobody would have been bitten.

Or are you saying that is why the clean-up was ordered?

Of people who do get bit, it is often people who are trying to kill them or catch them.

NY_Dutch said:
The number of deaths would be much higher if people did not seek medical care.
Click to expand...

Most likely, the same goes for the bees and lightning strikes.

When I was a young kid, as many as 13 people were killed by venomous snakes per year. Several of those were the religious nuts who use snakes.

This morning when I got up, there was a small Southern Leopold Frog jumping around INSIDE my motorhome. I have no idea how it got inside, perhaps carried in on me last night? Jumped in the few seconds I had the door open?

Anyway, I was able to catch it and let it outside.

It probably wouldn't survive inside for an afternoon here. It gets uncomfortably hot inside this RV here by then.

I walked up into my motor home a couple of months ago. My kid said, "Hold still", and proceeded to brush a scorpion off my shoulder. I'd rather have the frog.
OTOH, I chased a darned cricket around the coach for 3 days before I caught him out in the open.

I am now trying to get in the habit of taking my camera every time I get out of this RV.

I do a morning and afternoon hike but I see the most wildlife right inside this RV park.

The size doesn't show in the below picture, but it is quite large, several inches long. Anybody here know what is it?

Also, while I was charging my electric motorcycle, in the pond in the back of the building, there was a Softshell Turtle swimming around in the clear water that was fun to watch.

Now I have to also remember to not leave my camera in my motorcycle.

But here is the very large insect. It hops just like a frog. 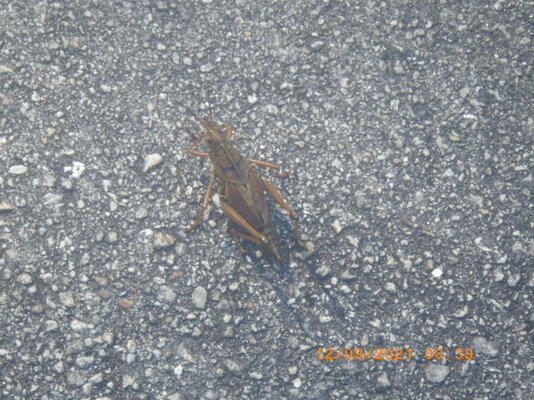 I learned the camera lesson also, and try to never forget it. You just never know what you will see--birds, snakes, turtles, whatever! Thanks for posting photos of the frog. FYI - Once in Florida I opened my electrical box at my site and found a tiny tree frog sitting inside it!
Z

@DonTom Maybe it's this kind of grasshopper?

JudyJB said:
Thanks for posting photos of the frog.
Click to expand...

The photo ain't that clear, but it was a large insect that hops like a frog! Looks more like a grasshopper or cricket, but several times the size of anything I have seen anywhere in the USA before.

ziplock said:
I hope you get to see a panther while you are down there.
Click to expand...

They have been seen in this area, on the Big Pine Key Trail (six miles one way, trail head across the road from this RV Park). But I have not seen any wild mammals of any type yet on this trip.

I have hiked up that trail a couple of miles until it turns into mud. Ground very saturated with water, so it may stay as mud for quite a while.

DonTom said:
IOW, if there was no clean-up, and the snakes were left alone, most likely, nobody would have been bitten.

Or are you saying that is why the clean-up was ordered?

Of people who do get bit, it is often people who are trying to kill them or catch them.

I don't know, or at least don't recall, what the kids that were bitten were doing at the time. Being kids at an inquisitive and fearless age though, most likely they were disturbing the snakes in some way as kids will do. And yes, the cleanup was ordered due to the bites and proliferation of the snakes. Sometimes they'd be sunning on the main school house steps and we'd have to use another exit before the cleanup.

ziplock said:
I hope you get to see a panther while you are down there.
Click to expand...

Today, I took a long several hour hike on the Long Pine Key Trail. I was able to easily walk around the mud today.

I saw nothing at all. Not a single snake, lizard, turtle or mammal. Not even another human. My GPS showed me as several miles away from the RV Park as line of site. Then I decided to turn around for the long hike back as I didn't want to do the entire round trip of 12.2 miles. But perhaps I did half of it today.

Since there was nothing interesting on the trail, even though it was 85F and a good temp for most reptiles, I took some photos of the trail. It's really more of an unpaved road the entire way. 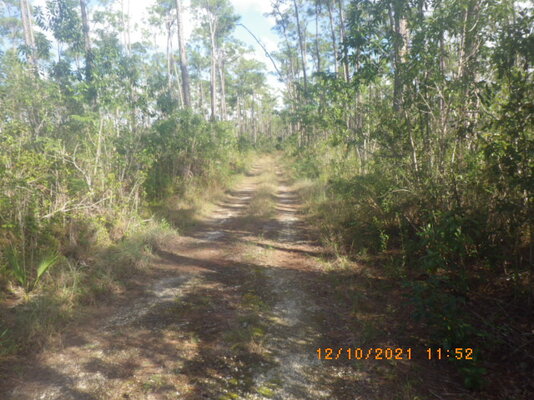 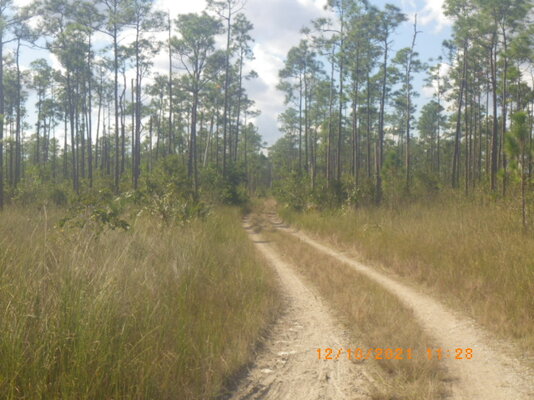 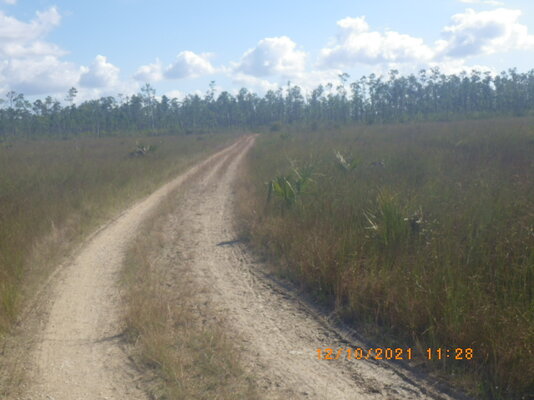 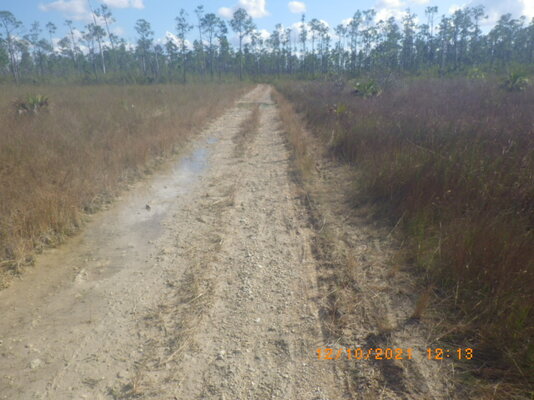 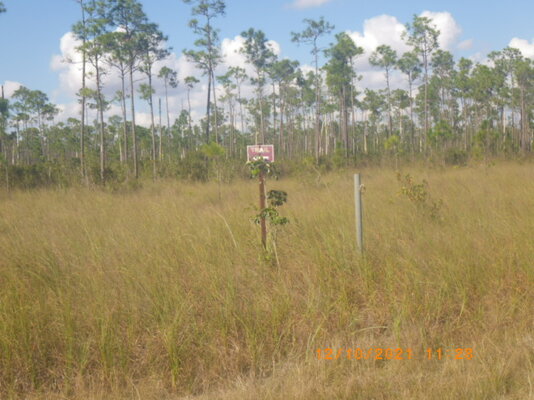 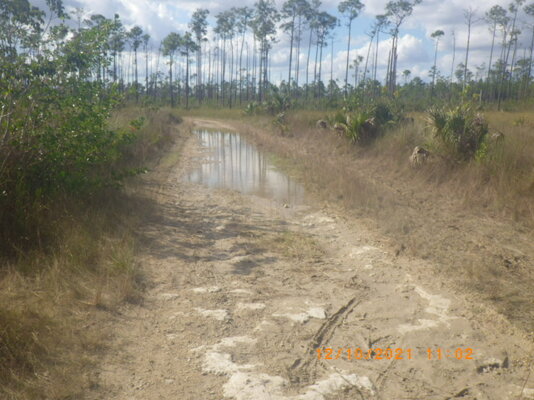 Are you allowed to tell your radio call sign on here?

Sure. To use QRZ to look up a call's personal info, you must log in which means you're a ham.

Use "by callsign" in the upper left corner and enter :

IOW, anybody here can look me up here with my callsign of AA6GA and get the info I want to share with others. Any others, hams or not. But to get my address of my main ham location or even my E-mail, one must log in with a ham radio callsign and have the email and such verified.

Say hello to Carlton for me, who lives in MD, who has a tech class license.

But if he is a tech class we will never meet on the air until he upgrades. I only do HF CW.

Yep, my buddy just said you are way out of his calling area.

But it's cool how small the world is.
You must log in or register to reply here.