The friendliest place on the web for anyone with an RV or an interest in RVing!
If you have answers, please help by responding to the unanswered posts.
See posts with no answers
G

After resisting for many years and relying on the wife for any and all things smart phone related my contractor grade flip phone is almost dead. The DW has a Samsung so it probably makes sense to buy one. But I've been a Mac user for more than 10 years and think maybe an iPhone makes more sense.

If I could find a high quality flip phone I'd probably buy one but I can also see the benefits of an iPhone. There are a number of apps I would be interested in. Things like blue tooth connectivity to my Victron BMS, the motorhomes plug in OBD device and the ability to connect a camera to the phone to see what's happening in those areas that are beneath the floor. (thinking of running some 12v extensions and 120v wiring from the Inverter).

Looking for suggestions for mid-grade phone. We're Verizon users if that matters.

Thanks for your thoughts.
C

I recently got a Google pixel 5. I really like it. It will screen calls for me. No more car warranty robo calls.
It also has "live caption", which is similar to closed caption on television.

I had an older iPhone 6. Bought a new truck, it was sluggish with the interface. I bought the iPhone 12. All I can say is wow, lightening fast and easy to operate. Open the wallet, in todays world, it's a necessity. Works great floating a hotspot for other devices as well, and really plays nicely with an iPad.
R

Like you I was reluctant to step into the 21st century but due to my wifes illness and lack of mobility I was forced to. Now I wouldn't be without my iphone, it even controls my hearing aids! For what you want to do I suggest an iphone 8 at the very least but that is already old news. If you go with an iphone 14 you can save a few bucks by getting the minimum data package and upgrade later if you find it is not enough. I'm 72 so old school but still keep finding cool and very convenient stuff I can do.
D

DW has a iphone I have a Samsung. My Samsung is so much easier to use. However since you like your Mac it makes more sense to go Iphone so everything will be synced. Be aware if you like music apple dumped ITunes. Now its all on YouTube music
M

Nothing of what you describe demands a kilobuck phone and spendy data plan to go with it. Over the years I always go with yesterday's technology phones and pay as you go service. Phones become unsupported/obsolete/crap out so quickly I see little point in buying a "nice" one, especially apple. Offering the suggestion that you buy a $100 android phone and $50 worth of airtime and try that for a while. I think you'll find it checks most if not all the boxes you need. This is a different discussion if you anticipate "living on your phone" like many today do, but it doesn't sound like you would.

In response to Mark's post, I had my last iPhone (iPhone 7) for five years, and my wife had her iPhone (iPhone 6) for a year or two longer than that. Apple is very good at keeping them updated, and support them quite far back. Since you are a Mac user, the iPhone make sense, though it is not cheap. But you could get one prior to the 12 and save some considerable money. But you would be more familiar with the way it works. And it does work great. I've been an iPhone user since the iPhone 3. Good luck, and keep us posted.
G

Thanks for the suggestions.

Ed, my wife is considerably more computer savvy than me and has an android phone. That's probably the best reason for me to get a similar phone.
D

You do know they still make flip phones dont you? Heck there is even a couple that are ruggedized to near militay specs.
M

Wife has had a series of iPhones. I use a Motorola Moto e which you can find on Amazon in the $100-125 range, less if you go with a prepaid provider (TracFone, Total Wireless, etc). It does everything I need it to do. Probably more.
M

Fair warning - I'm not anti-phone but I resent that I pay for a device that people believe I owe them my attention at their whim. I also resent that it's collecting data on me just having it on in my pocket. So basically I'm only interested in minimal functionality and performance. More often than not it's in airplane mode so there's less chance of being interrupted by it. Not disparaging those that use their phones a business tool, entertainment or for the utility and convenience they can provide. That being said...

There are tons of android phones out there under $200, some under $100. The cheaper you get the slower the processor and less memory you get. That may translate to you won't be able to store 10,000 pictures on your phone, your entire music collection or full length movies in HD. If you want those things, you need to look at the higher end phones. Mine's a samsung A10, got it from tracfone for $110 I think. I added an SD card for additional storage but I haven't used much of it. It makes and receives calls, and of course it can download apps from the play store. Camera works OK, I'm sure it's no apple i12 but I don't care. Part of getting apple products is you're paying premium prices for a premium product and owner experience which frankly is lost to me. I just want a phone and for what I pay for one wouldn't pay the insurance on a spendy i phone. I've been pay as you go since about 2003 and no telling how many thousands of dollars that has saved me over the years vs a "plan". Add minutes if you need them, but usually I can go 6 months before buying a $50 refill. Clearly, in today's world my usage is the exception but just giving an example that having a smartphone doesn't have to be an expensive or complicated proposition.

I recently bought an LG phone from Walmart with a $35 StrightTalk plan that does everything I need and I was out the door for ~$120.

I was in transition from a work phone and had Apple for years and years. I think Apple is a completely corrupt company, having admitted they manipulated the OS updates to purposefully slow down the phones. They paid a fine but so what? People should have gone to jail.

I then bought a Galaxy A51 - middle of the road phone - and in a lot of ways I like the LG better.

I agree with Mark - Buy a burner phone from Wally's and try that for a while.

I will honestly say that the Apple stuff integrates better with each other. My phone, watch and iPad worked great together. However I will say Apple is still stuck with a very stupid and difficult music set up. The android is very easy in that regard.

Also Apple seems to believe they own my data. I had a very hard time porting my contacts out of the iPhone. No simple "export" function and I ended up manually recreating my contacts list.
G

Bought a Walmart flip phone several years ago. Looked good and thought it would work. It didn't. At least not without jumping through some Verizon hoops $$$. Still I'll probably buy a burner and straight talk plan and check it out. Thanks for the suggestions.
M

I've had mixed results with pay as you go from the carriers, guessing that's not really the kind of revenue stream they're interested in. Been a tracfone customer prolly 8 or 9 years now and had some hiccups but nothing that annoyed me enough to leave. Once you're "in the system" you've got a few different ways to add minutes and from there it just works. There was no option to use it on an overseas trip but I was with someone that had a phone that worked, so it was a don't care. Other than that I've found that whoever tracfone buys their airtime from I've always had coverage where my wife's verizon "plan" phone does, so it's at least as good as that. 95% of what I do with the thing is via wifi so no issues with data limitations. I do zero financial activities with it.

Here is the best deal for you. 4G LG phone, one year of service and 1500 minutes for $60. Can't beat it for price. I have been using Tracfone for over 10 years. It is cheaper to buy from eBay rather than Tracfone's web site. 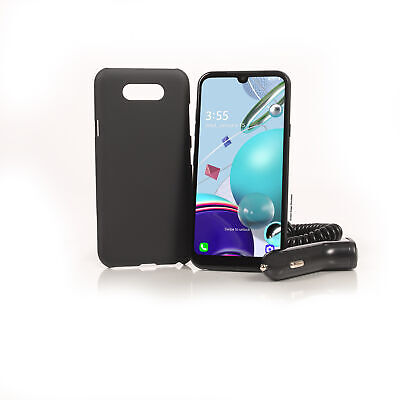 Find many great new & used options and get the best deals for Tracfone LG K31 Rebel + 1 Year of Service with 1500 MIN/1500 Text/1500MB at the best online prices at eBay! Free shipping for many products!
www.ebay.com
G

Thanks for the link Tom.

donn said:
DW has a iphone I have a Samsung. My Samsung is so much easier to use. However since you like your Mac it makes more sense to go Iphone so everything will be synced. Be aware if you like music apple dumped ITunes. Now its all on YouTube music
Click to expand...

What a bummer. Back when I switched from an iPhone 4 to a Samsung, iTunes was the only app I missed.

donn said:
DW has a iphone I have a Samsung. My Samsung is so much easier to use. However since you like your Mac it makes more sense to go Iphone so everything will be synced. Be aware if you like music apple dumped ITunes. Now its all on YouTube music
Click to expand...

Uh, really? I have iTunes loaded on three computers and my iPhone 12. Well, actually it's the iTunes Store on the iPhone. The player is just a music staff. But the iTunes on the computers current and updated. I haven't seen anything about it going to YouTube music. I bring up YouTube in a browser to listen to (and watch) music, but nothing in relation to iTunes.

Apple thought they would capture the music market with their proprietary file system. Too late. The world had already discovered MP3 and the rest is history. Apple made it as hard as heck for as long as possible I guess...

Of course, as usual, the only people that got truly hurt were the artists.

And their plans are inexpensive. We've been using them for many years, get coverage about the same as AT&T service, and have been pleased.
You must log in or register to reply here.