Trapped at the RV park!

Trapped at the RV Park!​
Well, this is a first for me. We are sitting at Coloma RV Resort in Coloma Ca. We arrived on Friday afternoon, and after bit of a wait, were admitted to our RV site. While researching the park, we noted that it was reviewed fairly well by various recent campers. One of the “warnings” was about the bridge that you have to cross to get into the park. It was built in 1915, and looks like it. It has a max height of 13' 6” and the width is very narrow. I crept across it with approx 4-6” from my mirrors and the iron structures that hold the bridge up above the river below.

On Saturday we got up to discover that the bridge was taped off and barricaded on both ends. A staff member of the park indicated that a local resident (likely DUI) crashed his car into the bridge supports about 2 AM. The county had came out and closed the bridge for further inspection. In the mean time no traffic, vehicle or pedestrian was allowed to cross the bridge. A few hours later some county trucks arrived and someone was working on the bridge, but no further info was provided by the park staff. The next day was Sunday and the bridge was still closed with no further info. Since Sunday is a major pull out day for most weekend campers, tension was building among the folks stuck here.

We finally found a flier (not distributed) by park saying that the bridge may be closed for an unknown length of time! Tenter's that drove cars or trucks were able to exit through a back roads way that required some dirt potholed fire road with some extremely tight twisty switchbacks crowded by over hanging oak trees. The road also dropped off a few feet on the sides in many places, so even a small mistake would be hazardous. RVers with TT, 5vers, and motor homes were forced to leave their rigs and drive out the back road. Many having traveled hours to get here were not happy with no alternatives.

Then to top it off, while researching the net for info about the closure, I found an article from June 2019 in the “Mountain Democrat” that discussed the need for the bridge to be replaced. The following quote is from the article:

Despite upkeep efforts, the bridge has received a failing grade from Caltrans for more than a decade and DOT staff’s preference is an on-alignment alternative that requires demolition of the old structure and building a new, wider bridge in its place

One of our biggest concerns is that with the bridge closed, no emergency vehicles of any size would be able to access the park, medical, fire, or police. I believe that this kind of information should have been provided by the park so RVers could decide if it was a factor for them. With so many wild fires burning across the west and Ca specifically, this is a roll of the dice in a heavily treed, grassy sloped area.

I know Rving is an adventure, but really? 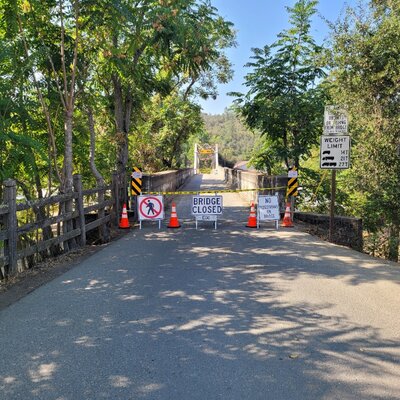 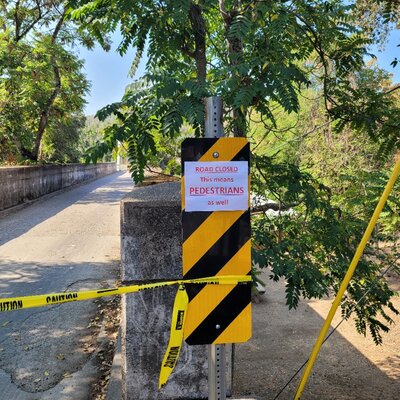 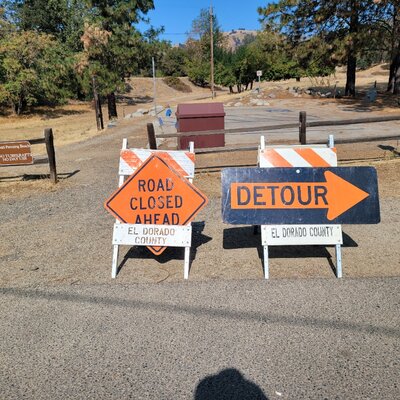 Call Bill and have him bring you a helicopter.

Don't laugh, that may be the only option!
L

Wow. I'd expect the County to do whatever it takes in short order to reinforce the bridge enough to get everyone's RV out. Or use a bulldozer to improve the emergency exit road if it's going to be the campground's new temporary (or permanent) access.

I hope the campground isn't charging full price while you're stuck there!

My sister's house and property in North Fork (near Bass Lake) is in the middle of a heavily wooded area with the only way in or out via a narrow dirt road winding a couple of miles through the forest. I've always worried about fire cutting off access, and last summer they were under mandatory evacuation for two weeks as the fast moving Creek Fire raced their way. They escaped damage when the wind shifted but a couple of homes in a nearby neighborhood were destroyed.

Dang! Hope you’re well-stocked. I don’t suppose the campground is waiving fees since you have no choice about leave/stay?

That campground is also screwed. I hope they had a good summer, they may have a few bad weeks until the bridge gets fixed.

JayArr said:
That campground is also screwed. I hope they had a good summer, they may have a few bad weeks until the bridge gets fixed.
Click to expand...

I'm thinking a few weeks may be optimistic. We have a bridge close to where we live that had some lingering damage from the last flood we had here, and coupled with the previous flooding, it finally did the bridge in. The supports and the underside of the bridge became critically damaged. That was in March of 2020. We may not get the bridge back for a couple of more years yet. Fortunately it is not critical for traffic...but it does take away a shortcut in to our little town here.

Anyway, I hope they do something. I was thinking along the lines of making the emergency road more accessible also. I think that would be quicker than even a temporary fix on the bridge.

That is some story, do keep us posted

Our upstate NY county has a few portable Army surplus Bailey Bridges they use from time to time for bridge/road washouts, etc. I've known them to erect one overnight to open a road back up temporarily until a permanent repair/replacement can be completed. I wonder if anything like that is available in that area.
L

NY_Dutch said:
Our upstate NY county has a few portable Army surplus Bailey Bridges they use from time to time for bridge/road washouts, etc. I've known them to erect one overnight to open a road back up temporarily until a permanent repair/replacement can be completed. I wonder if anything like that is available in that area.
Click to expand...

I don't know - CA refused to consider putting in a temporary Bailey Bridge when the Pfieffer Canyon Bridge failed, closing Hwy 1 and completely isolating Big Sur. It took them 14 months to demolish the old bridge and build a replacement

You might consider talking to the local county fire marshal about the impossibility of emergency services (fire and EMS) access to the site. The fire marshal may be able to put some pressure on the local government.
Best wishes on getting out of there with your RV.
Last edited: Sep 26, 2021

Boy howdy. All kinds of things running into through our minds. Allegedly there will be an inspection of some type tomorrow. If they show and if it passes, we are out. If not, this whole thing gets really weird. Although the park personnel has been lousy at passing information, they have said that they will not charge us for being here tomorrow. (We are due out in the morning)

But honestly if they determine that the bridge is unsafe and I am stuck, they will have a hard time getting a thin dime out of me. The way I see it, the RV park has known for 10+ years that this bridge was unsafe and did nothing to plan for it. What are they going to do, evict me?

It probably won't come to that. I hope.

Does this road give access only to the CG or are there private homes involved also?

Years ago in livingston, Montana, the same era bridge fell a couple feet. The engineers said it was history and ordered a Bailey bridge to connect the residents of the island with the mainland. The only thing that ages gracefully is wine and cheese

Ernie Ekberg said:
Years ago in livingston, Montana, the same era bridge fell a couple feet. The engineers said it was history and ordered a Bailey bridge to connect the residents of the island with the mainland. The only thing that ages gracefully is wine and cheese
Click to expand...

But only if you ARE NOT lactose intolerant

I mentioned Sarge's predicament to a neighbor this morning and my Bailey Bridge comment. He reminded me of a Bailey Bridge that was installed over a local creek after a washout about 10 years ago. He said it's still there because of a jurisdictional dispute between the state and county over who owned the original bridge and is responsible for replacing it.

darsben said:
But only if you ARE NOT lactose intolerant
Click to expand...

When I was a teenagers I discovered that ice cream caused me an upset stomach. I found out I was lactose intolerant. So I have spent the last 50 years avoiding ice cream, milk and cheese. A few weeks ago I threw caution to the wind and ordered a chocolate shake from Arby's. I was shocked when my stomach did not react. Since then I go get a small chocolate shake every day and I have not had any discomfort. I noticed that cheese doesn't cause any reaction. I feel like my LI has been licked. I searched for LI and found the following:

That's a tough one Sarge. Have you had a chance to explore the back roads with the Jeep? Google Maps doesn't give much detail of the roads but it looks like two possibilities.

That's a difficult situation but there's not much to do except keep on top of the camping site management. Maybe a call to a local news crew would help gathering more attention from the authorities?

Try to make the best out of the situation and enjoy your extended stay as much as possible. In time, you will look at it as a memory to share with family and friends.

Also, it's actually a good call to all of us, to expect the unexpected when RVing and try to be ready for such contingencies as best as feasible.
You must log in or register to reply here.