Would AC feed back if I plugged this charger in?

Here's a rough draft of my RV power system..
It's actually a boondocking system with 2 sets of batteries, 2 solar arrays and two separate inverters. (long story..)
Assuming I am on shore power (both inverters then pass-thru AC),

what would happen if I plug the Inteli-Power into one of the RV's Wall Outlets?

- Every component is grounded to frame. The neutrals of AC circuits are *not* combined to ground.
- Neither of the inverters have built-in chargers.
- Not shown is a Victron BMV-712 connected to the LiFePO's and shunt (not that it has any impact on my Q)
- Yes, the 13.5kBTU air conditioning unit does run on lithium battery when both solar arrays are pouring in. 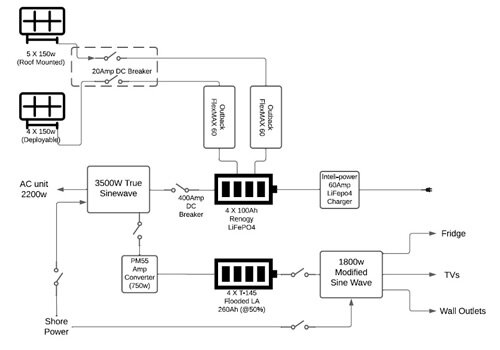 Nothing. You have multiple DC power sources and basically the highest voltage trumps the others. The BMS on the lithiums just sees voltage and amps, not separate sources.
L

Thanks!
But for some weird reason, I was more concerned about shore power coming through the wall outlets, travelling to the Inteli-Power and "mucking up" with the same shore power coming into the other inverter. Even though the other end of the 3500w inverter is just 12v DC and so is the other end of the Inteli-Power. I thought there might be some kind of weird signal noise circulating in that AC to DC back to AC loop?
If I understand you, you're not actually saying 'nothing' will happen. You're saying that the Inteli-Power plugged into the RV wall outlet will power up and begin offering charge current to the LiFePO4's - Right?

If I understand you, you're not actually saying 'nothing' will happen. You're saying that the Inteli-Power plugged into the RV wall outlet will power up and begin offering charge current to the LiFePO4's - Right?
Click to expand...

I would think that there would be no waste of power. Both inverters are on shore power and passing through AC current. No?
L

If they're passing through shore power, right - no problem. It's only a problem if shore power goes away and the inverters turn on while the Intelli-Power is plugged into the inverter. Adding an outlet that's only connected to shore power and plugging the converters into it will eliminate the possibility of creating a loop.

On DC side of life. you can have a dozen or more different sources in parallel and they work it out. As someone said The one with the highest voltage takes the load
You must log in or register to reply here.